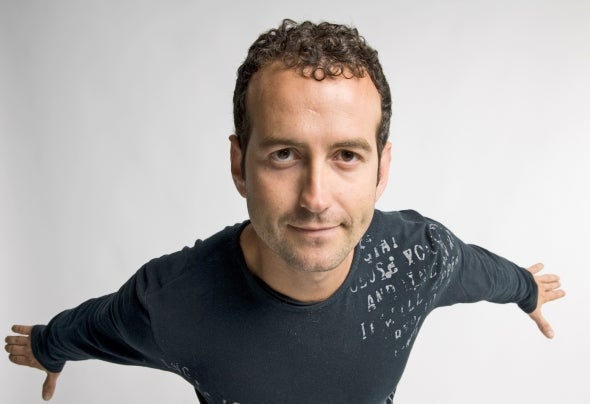 Born in Ibiza in 1976, Oscar Cano began his career as a DJ in small clubs on the island, and after a short time he had his big opportunity in Space-Ibiza collaborating in the legendary parties/fiestas of that time like Carry on (after hours at Manumission), Matinée, Home, etc. Shortly after he went on to be an official resident DJ, having the honour of sharing poster publicity with all the top DJs in the world of electronic music like Carl Cox, David Guetta, Groove Armada, Steve Lawler,Pet e T ong, Danny T enaglia, T om Novy, Chemical Brothers, Wally Lopez, Tocadisco......... Playing in parties/fiestas such as We Love Sundays, Matinée, La Troya, Carl Cox, Be Space, Hed Kandi, Come Together, et c.He has travelled to Brazil, Arab Emirates, England, Chile, Columbia, Germany, France, Italy among others doing incredible DJ sets in cities like Sao Paolo, Balneario Camboriu, Dubai, Bahrain, Abu Dhabi, Santiago de Chile, Bogota, Liverpool, London, Brescia, Milan, Rome, Stuttgart and a long etc.... He is an active member of Space World Tour, with them he has played in festivals like Eibisi Festival (Barcelona),Hora Cero Festival (Bogota), highlighting his incredible DJ set in December 2010 in Green Valley (Brazil) sharing poster publicity with Pete Tong. He also occasionally collaborates with several radio programmes in Ibiza, Global Radio and Radio Sonica. In 2007 he created the recording label e-ibiza records from which 50 releases have been sold with great success to the main online music stores of electronic music. In t he years 2007, 2008, 2009 he was nominat ed in the prestigious Deejaymags awards in two categories: Best resident DJ of an Ibiza island club and DJ of t he year. In 2008 he won t he Deejaymag award for best revelation recording label for e-ibiza digital records. The remix of Dario Nuñez’s production of 2010 “Are you gonna go my way” has been nominated for the Deejaymags awards 2010 as best remix. The awards ceremony t akes place in February 2011. On several occassions his productions have reached the top 50 of the main online music store lists : Beatport, Juno Audiojelly, Trackingspain, Freakybeat etc. Reaching number 1 in Trackingspain with Sick Dance in November 2008, receiving support from DJs like David Amo y Julio Navas, John Aquaviva etc. His first success in Beatport was: La musique (Beatfreak records) which got into the top ten of Progressive House. His production of “Are you gonna go my way “2010 got to number 4 in the Top House and number 10 in the General Top of the prestigious online music store Beatport. Becoming one of the House hits of the winter of 2009/2010.Money for Nothing, another hit of Oscar Cano, Freddy Marquez & Dario Nunez reached top 20 in Beatport on year 2011. In summer 2012 Can ́t Stop, another production with freddy marquez reached top 2 on beatport, becoming one of the hits of 2012 and a summer bomb!His music style is house in all its variations, being tremendously eclectic in his sessions, mixing pop with progressive house, electro and constantly playing bootlegs of well known music not conforming to putting on only the top tracks of the moment when he is playing.In 2010, he decided t o creat e t he alias “Sirkane” t o give free rein to his Underground musical restlessness, editing various releases Tech-House which have been popular and with very positive feedback from artists like Amo & Navas, Peter Helderblom etc.As Sirkane, Oscar has done some incredible sets in Spanish clubs such as Movie Music Club, Level, Grial Ibiza, Image......and still has a lot to give. In 2012 he has created a new label, Yebisah Records, you will hear about this House/tech house label this summer for sure!Lots of new tracks coming, new projects, keep your eyes open and remember this name: Oscar Cano is a great talent!