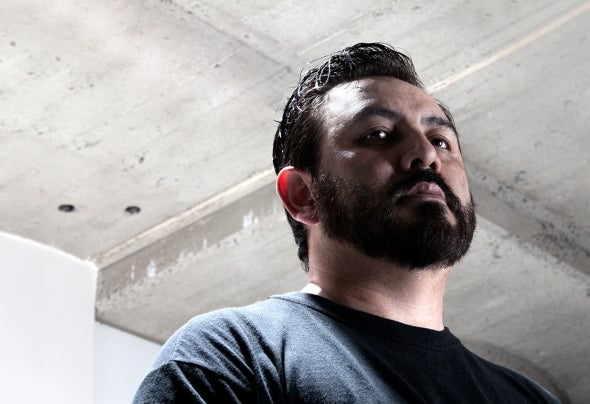 American born and Los Angeles bred DJ, producer, and artist David Alvarado continues a career that has spanned well over a decade, and is still considered to be one of electronic music’s best kept secrets. He is best known for his work on some of the worlds most respected imprints such as Ovum, Ultra, Peacefrog, Yoshi Toshi, Plastic City, Strictly Rhythm, and Guidance, along with his early work on his own label Bomb Records.David began his career as a DJ running a renegade sound system and deejaying underground parties around the Los Angeles area. He quickly made an impact on the American electronic music scene with his unique style and signature music selection. His work as a producer and artist began to take root after a chance meeting with the legendary Plus 8 duo, Richie Hawtin and John Acquaviva, who stumbled across one of his very first works and invited him to be a part of their newly formed Definitive Records. From there David forged relationships, and created a body of work that would take him around the world, opening the door to performances at legendary clubs and events such as The Ministry of Sound, The Hacienda, Fabric, Tresor, Florida 135, Row Club, Panorama Bar, The Arches, Extrema Festival, Sonar.David is currently releasing music on his own imprint, as well as making continued appearances as an artist ton Josh Wink’s Ovum Records. He continues to actively tour, bringing his unique sound as a DJ and performer to many of the best clubs and venues worldwide. Fusing new technologies and creating a DJ/Live experience that continues to make him one of America’s most respected talents .