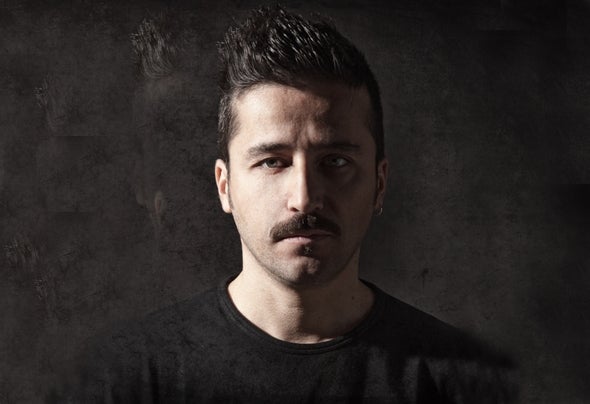 Born in Barletta, Italy, Ricky as a child attended clubs regularly with his father and uncle who were owners of the club "New York New York", which was one of the most famous in Italy in the '80s. Very few he was immediately captivated by the charm of the atmosphere. The lighting, mirrors, music, but the DJ, he felt the music of the vinyl. He remembers sitting in the car with his father, listening to the tunes of the evening, travel crazy, rap with funk, scratch discs and the first house of Cesare Tripodo (DJ Trip). While his friends were dancing and having fun, he sat for hours near the console with the DJ. He watched him, listened to him, studied him, learning to understand the strengths and weaknesses. The music transmitted energy, joy and emotions and he knew he wanted to be a DJ. He bought vinyl music, funk, house & techno! So artistically Ricky aroused in the early '90s.Inspired by the DMC school, he mixes electronic music with “old school” technique and his musical knowledge. Without musical boundaries he is able to create every time a different music sequence, characterized by techno, dub, house and funk contaminations.For Ricky "Music has ties with painting and photography. People visualize the emotion, energy, joy and melancholy, like from a painting or a photograph. No one can know or speculate about music. The music you hear. "Ricky has performed at most important Italian clubs: Divinae Follie and Jubilee; Link in Bologna; Underground City and Fixx in Pescara; Atlantide, John Lennon and Party in the Wood in Abruzzo; Domus in Perugia; he is the protagonist in The Flame parties at Merendero, Villa Renoir, Nautilus, Dolium, Theorema Disco, Clorophilla, Celler, Butterfly, Zenzero,Wasabi.In 2004 he performed at the fashion show in Milan (Milano Collezioni @ Jacaranda Studio) and Paris where he played as a guest at Opus and Villa.He has participated in Hormonika, Heart Bit, Moog Festival, Guendalina Love Festival, Stardust electronic music events that saw the presence of several internationally renowned djs.Ricky produced on his own label Metroklang Records his first album "Barduloso Ep" in April 2011 with the collaboration in the remix of the German Yapacc, producer for international labels like Perlon and Wir.In November of 2011 Ricky released his second vinyl "Disco Ball", with the remix of the Chilean dj Aldo Cadiz. “Novulation” is the third vinyl on May 2012 with the remix of Argenis Brito.In addition to working in the clubs and on many projects, a few days ago he had the honour of hearing one of his tracks played in collaboration with Aldo Cadiz on the prestigious "Desolat" by Loco Dice.