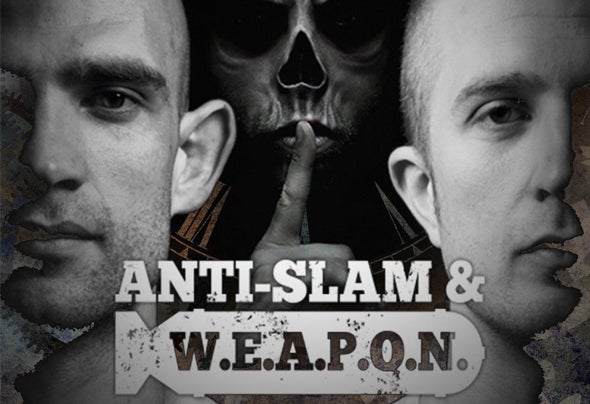 Anti-Slam & W.E.A.P.O.N. are brothers from the UK. Formed in 2011, they have been quickly gaining pace with their distinctive, groove-driven Techno sound having released on Bitten, Toolroom, Tronic, Deeperfect, 1605 Music Therapy, Natura Viva, Driving Forces, Pornographic, Yellow, Sabotage, Respekt and Funk’n Deep.The support for them has been huge over the years with their music being played by Carl Cox, Richie Hawtin, Adam Beyer, Umek, Sam Paganini, Jay Lumen, Stefano Noferini, Christian Varela, Stacey Pullen, Paco Osuna & many more.The launch of Anti-Slam & W.E.A.P.O.N.’s digital label, Jumpstereo Records, back in 2014 was a key part in their career. The label is growing at an extremely fast pace and gains constant support from some of the biggest and best DJ’s in the world which has helped push the duo further and further into the spotlight. Now with the launch of their vinyl label, Jumpmono Records, things are moving faster than ever. Across the 2 labels is huge roster of artists including Koen Groeneveld, Spektre, Alex Di Stefano, Raul Mezcolanza, Mr. Bizz, Etai Tarazi, Alberto Ruiz, Drumcomplex, Phunk Investigation, Spartaque, Paul Strive, Steve Mulder, D-Deck, Richie Santana, Ant Brook, Alen Milivojevic and many more.When it comes to DJing they are no strangers to the scene, having played all over the globe for some of the most well known brands in the world including Cocoon, Meganite, and Global Gathering.