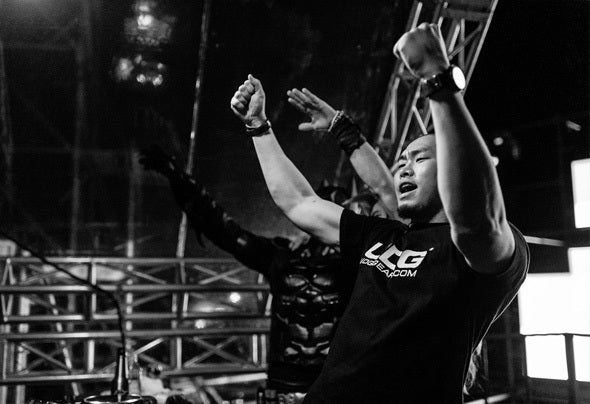 Bagagee Viphex13 from Seoul Korea, the representative of powerful DJing and destructive t echno.He got 2nd winner title of 'Miller Fresh M competition' which proceeded over 6 months in 2009, which was the result of his taking charge of making the overall music of 'Mind Busters', an audio-visual team. This gave Bagagee Viphex13 much recognit ion of BT, Yuksek, Cap10kert and so on. In the same year, he was chosen to be an artist from the Livid Instrument, the manufacture company of Midi controller and worked as both the Korean official DJ of portable DJing machine Pace Maker and the official-sponsor DJ of Korean Best DJ grear shop DJKoreaAs a member of 'ARCO12' and 'ECI Korea', Bagagee Viphex13 devotes himself to preserving techno because this genre doesn't have many stages to be played in Korea yet. Also, as a member of '2E2L Recordings' in Japan, he's making a great influence to the underground techno scene through constant interchanges with Japanese DJs.He released his own album by making contracts of tracks with various labels such as ECI Korea, stereOOxid, Nuuktal Records, FLU.Records, Perfection Recordings, Midi Life Records, Sabotage Records and Sex panda Toys and more which are the world class techno labels. Bagagee Viphex13 worked with Afonso Maia, Citizen Kain, Dualitik, Worda, Simon Roge and Vid Marjamovic who are the big-name and popular artists to techno mania. Also, he is supported by massive world DJs like Umek, Christian Cambas, Spartaque, Billy Johnston, Markus Schulz, Dave Seaman, Monocraft, Harada, Koen Groeneveld, Veerus & Maxie, Shin Nishimura, and more.Diskotekno Mixbox, his own monthly mix-tape on-air program, is regularly broadcasted in 'Digitally Imported' (di.fm), the most popular internet radio broadcasting of EDM.Bagagee Viphex13 has been invited to play his DJ set not only in all the great and small parties and festivals in Korea, but also in Ageha (the biggest club in Asia) and the 11th anniversary party of WOMB in Sibuya. This is a honor to Bagagee Viphex13 himself and tells us about all of his career. He has also worked as a musical director of broadcastings of every kind, awards, fashion shows, dancing, games and CFs and this makes him distinguished in many different fields.