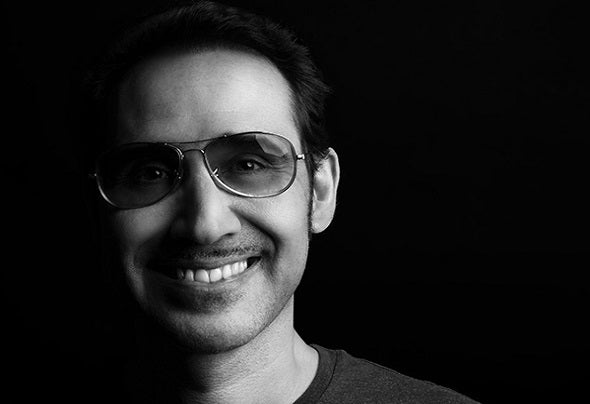 He started in the late 80's. He began his eighteen-year career that led him to become the resident DJ of the most established and undisputed Sicilian hinterland. The numerous exhibitions in different cities will lead him to undertake collaborations. With Metamorphosis and Atmospheres will be on tour for several years in the best club giving birth to our first After and After the in Sicily playing alongside the best dj 's the international scene. Recognized his musical taste, the search of the sounds and the constant desire to spread an alternative music always ahead of the times and fashions, Marco Giannone writes, composes and presents to its DJ sets always clean and tailored to each event. It will then automatically record the beginning of a journey that begins with Andrea Centorbi in 2000 will be produced vinyl records '40 Nights' and 'December's Party' present in the playlist of Radio Deejay for several weeks. The first recording contract with the Company JT JT Vannelli in 2003 and will lead to the production of other 2-disc 'Another star' and 'Shake it down' they'll find excellent results. This will be very sold and will remain for several weeks in the charts.Later in 2010, the Bang Records released 'House is in my soul.' The following year he participated in the compilation 'Studio 58 - Compilation One' collection made by the homonymous club Studio 58 where it is resident DJ. In 2013 comes with 'Broken Heart' and 'Five Trips'. There have been numerous collaborations over the years as an organizer and artistic director of several clubs, dealing not only music but also offer corporate marketing utilizing all media platforms. Marco Giannone continued his work with passion and determination of the precise objective of contributing to musically enrich all generations of fans continues to grow. In 2014 he began his collaboration with the label MusicSelection Records and celebrates the release of the Music Selection Compilation # 1 on sale now at all music stores.