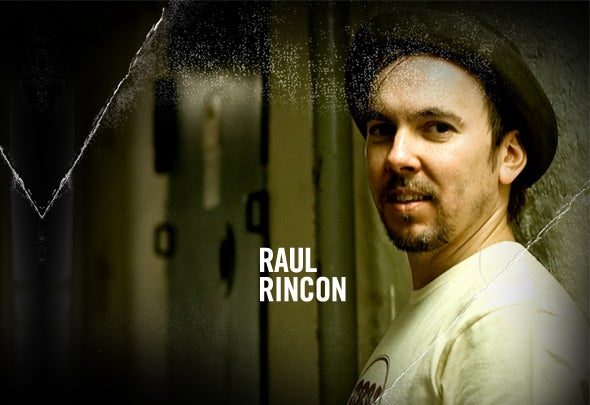 1988 Raul Rincon starts his dj career at Stuttgart's upper-class club "Boa". At the age of 15, Raul has saved up for two of the legendary 1210 Technics series. With these two divine devices he sets off his very own bedroom bedlam in his discoish children's room. 1990 Being a real vinyl maniac, Raul joins South Germany's very first import record shop called "Casablanca for Mr. DJ". In this ultimate meeting point and hang-out Raul soon turns into a specialist for the hot vinyl stuff. 1991 Raul Rincon has established himself within the club circuit. As a resident dj with club Zorba the Buddha, Raul Rincon presents a 9 hrs set every weekend. It is at this club that he gets to meet his later business and production partner Dip T Jones. 1992 Whereas the know-how of commercial "music producing DJs" is sometimes limited to fumbling around with their music software, Raul is equipped to the max with the knowledge acquired by visiting the famous "School of Audio Engineering" in Frankfurt/Main. However, without a musical background nothing works: Since the age of 8 he has had classical piano training, and rumour has it that he is even quite good at playing the church organ. 1994 Dip T Jones and Raul Rincon work together in their "TONHAUS" studio under the names "Jerk Work", "Drop Dishes" and "Snack". Their magnificent output consists of 35 productions and more than 80 remixes, including different commissioned work e.g. for the Euro-charts storm entry N-TRANCE as well as for people like LUTRICIA MC NEIL, KYM MAZELLE, SAMANTHA FOX, DIE FANTASTISCHEN VIER and even top 10 rockers FURY IN THE SLAUGHTERHOUSE! 1995 His friend Andreas "Bär" Läsker gets Raul to join the ambitious COUNTING label as dj promoter and assistant. By doing so, he becomes part of the management for hip hop pioneers DIE FANTASTISCHEN VIER - the Music Bear factory. 1998 There is hardly a DJ who does his job in such a consistent and passionate manner. Raul has made his passion for vinyl his profession: As one of the most competent DJ promoters he supplies 12-inches from his "vinyl sloppy pool" to more than 1.000 DJs for about four years, using the name "DJ Schlumpf" ("smurf"). 2000 Raul splits up with his business partner Dip T Jones to fully engage himself as a solo dj artist. The name "Raul Rincon" used to be a joke back in the times at TONHAUS studio, now DJ Schlumpf turns into Raul Rincon and never looks back. From 2001 onwards, he has been producing and remixing exclusively under the name RAUL RINCON.