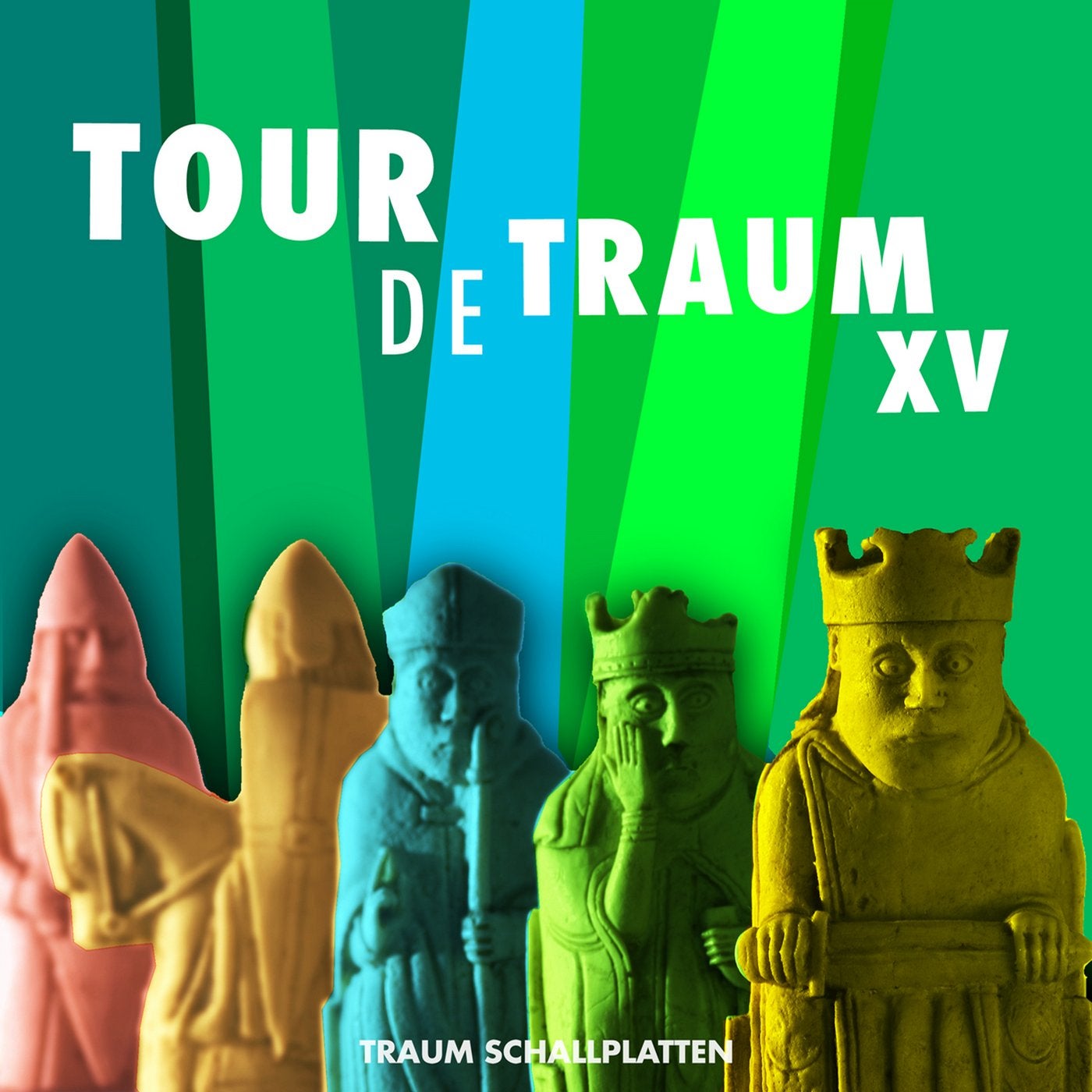 It is time for another Tour De Traum chapter. After six months of listening to tracks we think these were outstanding. Welcome to the Traum Valley of beats and sounds:

Mo Mirxa - When Its Dark Out
The opening track comes from Mo Mirxa a great artist form Nebraska (United States) who has created a slow beat track with a moody melody that goes under your skin in big way.Slow motion music at its best with a melody that connects to the heritage of Dominik Eulberg and affiliated artsist of ours.

Mario Hammer & STIQ - Treefrogs
In BerlinMario Hammer never sleeps but fiddles with his analogue synths. This time he has teamed up with the German act STIQ who released a great track with us already. This one is nothing short of amazing.Mario and STIQ have recorded a magic momentum here, an organic evolving track not composed but generated from the inside out.

Deep In Calm - Nowhere City
This is melodic deep house at its best written for a lush hot summer day where every step is one to many. We could not do without this track. "Nowhere City" sinks into your blood vein like ink.

Sunspot (NL) - Little One
The sun drenched track "Little One" by Sunspot reminds us of early music by Manchesters 808 State. This music is like spring, when all comes to life. A track that moves in pirouettes and is full of joy. Who knows us, knows that we are big fans of that time in techno history.

Estie - Horizon
"Horizon" by Estie is more electronic and contains more of the edgy sound we are associated with. The track has an amazing progression with inventive changes that make it a true wanderlust track , not to be missed.

Johan Mila - Llamps Del Nord
The Tour De Traum XV gets more electronic with Johan Mila. His tracks kicks off with an ambient intro but establishes a theme of drones and ancient sounds that blend together and create a mystic and tropical cocktail par excellence. Voodoo electronic dance music that we love.

Kachelly - Clouds
The title "Clouds" fits perfectly to the music. There is this lightness to the track and a bit of a slow motion feeling. Picturesque images are zoomed in and glide away into nothingness. Cinematic music at its best.

Thyladomid - Dejavue
After Thyladomids "Places" album on Traum he gave us this track and we instantly fell in love with its gentleness. This is as personal and private as you want modern house music to be. Dive in and stay in.

MKLY, Sides - Pangaea
Mighty funk house music by MKLY & Sides in the shape of their track "Pangaea" with that electronic edge and progression we love for our label. This is music like a trip and how we understand Wanderlust music. Music composed with a lot of details that keep the senses busy and animated. Heartbreaking deep stuff!

Daniel Helmstedt - Arithmetic
Techno music is approaching with this perfectly twisted composition "Arithmetic" by Daniel Helmstedt. Melodic emotional music with a lot of progression bent to the extreme but always returning to its original shape making it a real musical adventure we get kicked out of.

Life In Bassment - True Love Is Suicide
Romantic music by Life In Bassment, sounding like a band playing an amazing composed piece of music. Very modern and not restricted to the lifeforms on earth. This is futuristic music on a very high level that will clad you in melodies never heavy an overpowering but light as a feather.

Floyd Hoogendijk - Breakdown
Floyd Hoogendijk has been sticking with us for some time now and we know he is a genius. Every episode of DR WHO would love a theme like "Breakdown" to be incorporated. Music that makes your senses dizzy and lets you think about resetting your life and going back to the time of your youth. Daring and wonderful moments you want to keep for yourself.

dreamAwaken - Family Dub
Every recent Tour De Traum includes one dub track. It is something we have developed for ourselves because we are fans of that genre. dreamAwaken has managed to revitalize this genre by adding fantastic melodies and compositional elements. The acoustic quality of the sounds is amazing and on a very high level. This is music that keeps you tugged in a heartwarming bubble of music.

Riamiwo - Dispersionsrelation
Riamiwo has joined us a couple of times now and we are always pulled into his tracks as if by a magic power. "Dispersionsrelation" has that quality of Kraut Musik and who knows Riamiwo, knows that the analogue and untamed sound is a key element of all of his music. We for sure will see that in his coming video.

Giddyhead - Famille
We welcome back the Argentinian artist Giddyhead who has released with us before and who is contributing here with "Famille" an impressive piano composition. If you like the music of Erik Satie or Debussy as we do you will appreciate this piece of music. Giddyhead has been recognized by some mayor protagonist of the scene and goes his own very private path which we respect.

Mintech - Hidden Impulse
Mintech aka Mario Mangiapia is widely know for his techno productions that focus unwaveringly on the dance floor and that have connected him to quality producers. Here he has written a piece of music bordering the terrain of melodic music. Still keeping the energetic powerful production he is known for, the combination of old school melodies and new school beats make it very attractive.

Pak Sota - Sweet Spots
Pak Sota convinces with an impressive powerful minimalist baseline and funky beat programming that gives way to stabs of melodic chords and effects. By this he creates a dubbed out sensual and hypnotic feeling. Simplicity at its best.

Ikaro Grati - Hygge
Fans know this tune since we released it this year and it directly made it high into the Beatport charts and into the heart of Stephan Bodzin who made the release, release of the day. For all of you who have missed this late night track, check it out here.

Ümit Han - Olive Tree
Ümit Han released a full EP on Traum some time ago and has been hugely successful with his project Black is Beautiful. Lately he has been focussing on ambient electronic listening music. His track "Olive Tree" fuses British old school electronic music with real played piano music to accomplish a piece of moody music that keeps a perfect balance and flow. The track slowly evolves and has the time stand still making it a wellness oasis for the soul. Listen to his music for pure relaxation.

First Of The Last - Lost And Found
First Of The Last has written with "Lost And Found" a sensual and soft sounding piece of music that sneaks into your soul with little effort but great effect! It blends the spiritual side of bands like The Doors with the quirkiness and compositional side of Ravels Bolero to say the least. This is a masterpiece.

Geist, Shunus - Susurration
The perfect continuation provide Geist & Shunus with their track "Susurration". It is indeed a great aerial & ambient piece of music that throws old school elements in an absolutely modern environment. Note the extreme skillful and artistic break down you will not forget.

Ri Za - Ndrangheta
Ri Za has been an active member of Tour De Traum in the past and returns here with his newest invention: "Ndrangheta". His trembling tones remind us of German minimalist Manuel Göttsching but his baseline is all Chicago house and early UK sound. But whoever now wonders how all of this can create a coherent picture should listen lend an ear to this track because it does form a fascinating psychedelic pattern. When you thought you heard it all Ri Za laces the theme with single guitar notes and last but not least has added a Basic Channel feeling. How does this all work? We have no idea, but it does in a mesmerizing way.

Another Life - Blurred
Domestic talent from Cologne Another Life has committed to Tour De Traum XV with "Blurred" a track that is definitely new school in its unobtrusive and gentle way it approaches you."Blurred" slowly closes up to the dancer with an enveloping seductive and lush atmosphere before After Life turns up all parameters towards the end of the track. A bit of an exhalation that is more than welcome.

Teho - Go Away
For all of you who missed Tehos great EP this year on Traum we have included one of the tracks on Tour De Traum XV. His EP was big talk on Spotify and overall liked by virtually every fan connected to us, so you might want to check it out.

Mischkonsum - Seesturm
Mischkonsum, DJ and producer from Graz who has been sharing the DJ decks with Ben Klock, Mind Against and Kölsch has put his experience of how to move people in this track."Seesturm" is an unorthodox blend of classic post Detroit techno elements with new school melodies. This is the only track of this kind in the track list and you definitely want to check out how this works out for you!

Do Shock Booze - Koyanannikatsi
Japanese artist Do Shock Booze has been very active outside Japan and has release several trax with us on recent Tour De Traums. His unique style is very unlike anything you will hear in the charts or in trend magazines. If we would try to pigeonhole his track "Koyanannikatsi" we would say it reminds us at times of older Plastikman trax but more exotic and untamed.

Manera, Welticke - Palo Santo
Berlin based producers Manera has teamed up with Cologne based artist Welticke for a combined effort to blend hypnotic melodic music with a driving powerful techno spirit.The repetition in a Krautrock finesse keeps the track accessible while still progressing and keeping a certain deepness with in pounding techno beats.

Borderline Girlfriend - Please Destroy Me
Formerly know as Tumbaco Space Museum this is a new project of Sebastian Wasner and Joanna Fraczyk. The duo from Vienna has with "Please Destroy Me" composed a highly infectious piece of music. Energetic sequencers give us no rest but constantly shift gears to refill our dopamine storage. This is music for ecstatic moments.

Natures Void - Gelato
This slow funk track made in New York City by Natures Void is so funky it makes a scoop of ice cream falling onto your lap feel sexy. We invite you to get a feel of "Gelatos" minimal effort and high effect. This new project is hell of fun and can even be danced to at 40 degree celsius.

Unspent - Icinga
The duo Unspent have release a full EP on Traum featuring this track, radical music for radical people. This is energetic music with a big heads up to the Detroit techno inventors. A place where fiction meets reality. Music perfectly illustrating the hectic times in concealed places. Listen to it in an underground metro station.

Muni Manuka - Cheat Fate
Vigorous beats, breaks and baselines are the ingredients for this highly inflammable groove cocktail by the London based artist Muni Manuka. Check out "Cheat Fate" and you will know what a big city and big lights might mean to him.

Losless - Sweety George
The duo has stimulated and impressed us with their EP on Traum. We have picked "Sweety George" to impress also you. This is music which is forced through layers of membranes to filter through to you synapsys. This is the funeral of techno and the beginning of something new.

Nepou - Lichter Der Grossstadt
The last track and the good bye track for the whole Tour De Traum XV? Well, for sure not. It announces the beginning of something new and expresses that all happens in cycles. This track is great. The notes fall like heavy rain drops and the mood is that of a rainy day.