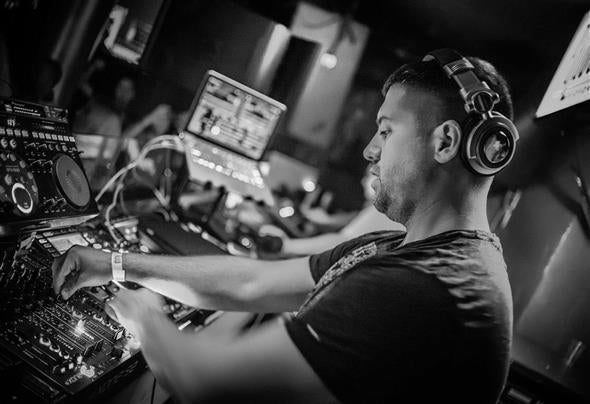 Chriss Ronson was born on the 26th of October, 1977 in Budapest. He has entered the world of music industry at the tender age of 17 and ever since has been a frequent guest of the best clubs and events in Hungary as well as on the International music market.In 1997 Club Korona in Hungary became the official home of the world famous BPM events which has hosted amongst the many International star DJs (Sasha, John Digweed, Chemical Brothers) branded events such as the Global Underground events, THE END, Renaissance, Cream to name, but a few. Krisztián was resident of all events from start to finish. He was also participant of the mix album of Nick Warren's - Global Underground album from Hungary.In 2001 BPM and GU moved to HOME in Budapest where Chriss carried on as resident. Deep Dish, Carl Cox, Nick Warren, Dave Seaman has been all benefiting from Chriss's brilliant warm up sets. At the same time he was also resident at Pacha Budapest for over 2 years. His ever expending friendship with the International Djs has got him invited to play abroad. He played on many of the Berlin Love Parade, Creamfields, Summer of Love and Haradhouse festivals, fabric London and the legendary The Cross in London. His performance at the Renaissance event in London has drew the attention on him and Mixmag has decided to that it is time introduce him to the rest of the world by featuring and article on him.He has played many times in Japan and also was guest along with Anthony Pappa's Global Underground debut party in Tokyo. He has been a regular guest in Tokyo and Osaka since then.In 2003 his first mix CD is published called Directions.He founds THE QUASARmusic group with his friend Ritchie. Their first track Together is played in John Digweed's radio show on Kiss 100 and praised by John.In 2005 his production work brings him word wide recognition. His tracks are fettered on John Digweed's and Hernan Cattaneo's hit list and is also played in three different versions in Digweed's Kiss 100 Radio Show. Hernan played it at Metro Dance and it is liked by names like Dave Seaman, Anthony Pappa, Desyn Masiello to mention but a few.- In 2005 he was invited to be supporting DJ on Tiesto's on Tour iin Eastern Europe.- The same year he starts his own online radio show on www.justmusic.fm which is called Monitor. Soon it became the most popular online show in Hungary.- In 2006 he was touring Thailand where he has played at the world famous Full Moon party in Koh Phangha entertaining 15000 people. He has also played at several clubs at Koh Samui.- In 2007 The Quasar was asked by John Digweed to make an exclusive half an hour producer mix, featuring their own tracks. His relationship with John Digweed has led him to play the warm up set for John Digweed on his Transitions Vol.3. Album tour in Europe.- Renaissance has asked Chriss to mix a territorial Renaissance Hungary CD, named Renaissance Hungary – mixed by Chriss of The Quasar. The release was supported by a 20 date tour, with guest Djs - Marcus James and Neil Quigley.- His track, called Panama is released on Nick Warren's – Lima Global Underground album.- He has his own radio show in Proton, named We Are Cre8tion.- 2009 started well: The Quasar – Nectarin and Shining tracks were released on the Carl Cox DVD!- He got invited to Hernan Cattaneo’s release party to Moscow, to the famous Arma17 club. Shortly after he got invited to Japan to K-Sounds birthday party with Dave Seaman.- He joined Fabric Publishing at the end of 2009.- His tracks were released by Global Underground, Vapour Records, Ready Mix Records, Ambiosphere Recordings, Soulman Music, Toes in The Sand, Pure Substance, Foundation Records etc.In 2010 he played twice at the legendary Fabric in London. This year ha also founded Cre8tion Records,In 2011 performances has enriched his repertoire; Fabri, Snow Attack Festival in France. Balaton Sound Festival on the Cadenza stage with Luciano, Marc Antona and Mendo. He also played at Coca Cola’ssummer open air venue at Lake Balaton with Paul van Dyk. In August he entertained the audience of Sziget festival with Steve Angello. At Bónusz Festival he played with Sasha, Joris Voorn, Guy J, Dennis Ferrer, Maya Jane Coles.- The same year he has produced "Don’t Look Down", which has reached No1 on the VIVA music channel and the music video which was filmed in London Soho is featured over 10 Internationl music channels. http://www.youtube.com/watch? v=6VVW0iLEN5Y- Trandel feat. Chriss Ronson - Chaki track was released on the jubilee Renaissance Master Series album, compiled by Dave Seamen.Chriss is a true DJ in every sense. He is a peoples DJ. As much he has his own style, he is flexible to play the right type of music for the crowed he is con fronted by. He has a thorough understanding of how to tease a crowed before top guest DJs, but equally he can drive the dance floor mad with his unique sound in the graveyard shift.His mixing is second to non and his music productions skills are speaking for them selves. He could be a true asset to MOS.