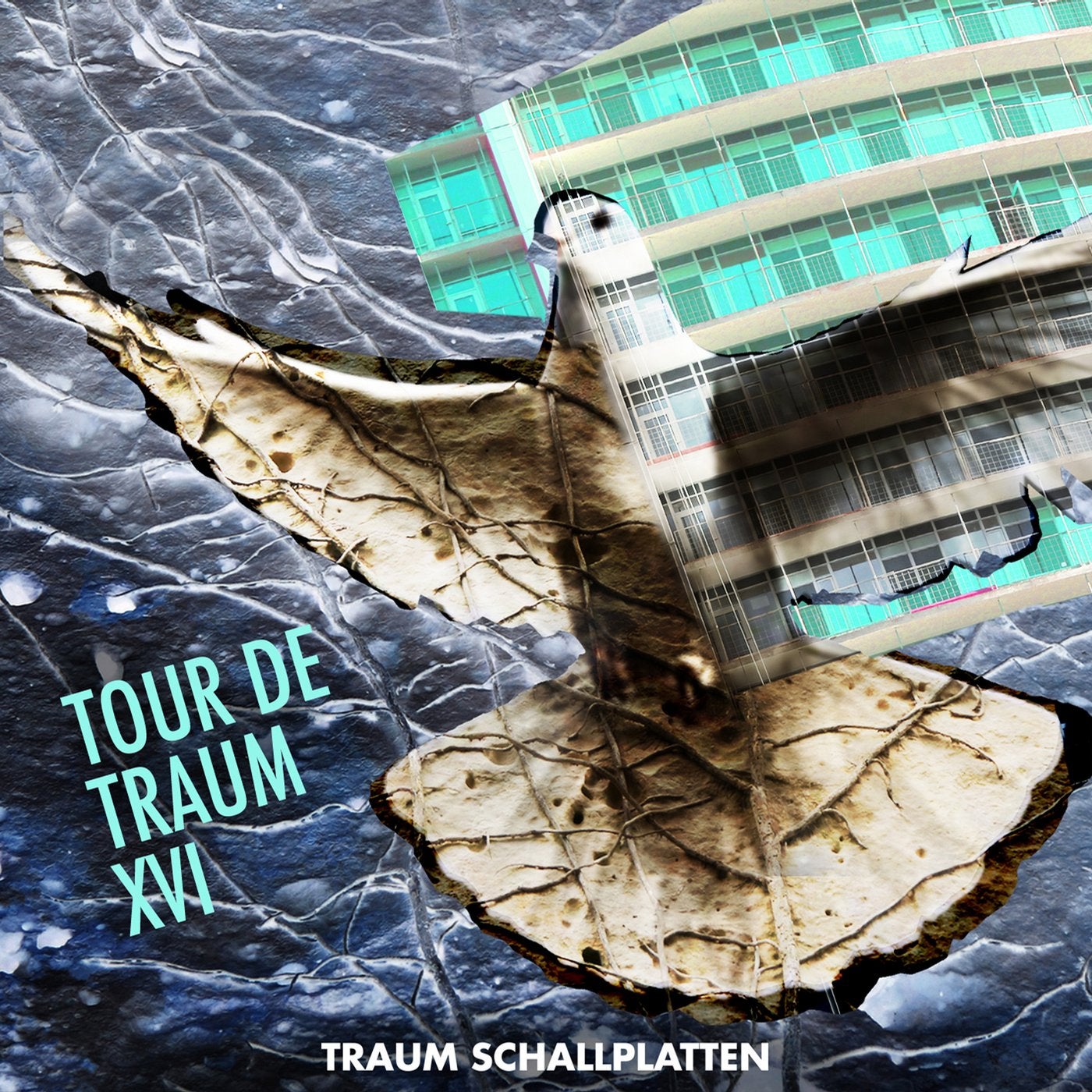 The Tour De Traum XIV (16) is taking on new challenges by discovering and releasing new artists. Since the label is also celebrating its 20 Year Anniversary you will also find some of their biggest classic on this release including artist such as Process, Dominik Eulberg, Ryan Davis, Ricardo Tobar and Jesse Somfay.
This time we feature a lot of class, individuality and non conformist electronic music to listen and to dance to.

The new Tour De Traum kicks off with CtlZs "Set Her Breath". A wonderful ambient - electronic track with a sophisticated composition and a quest to create a pensive mood.

Followed by Nasca with his track "Winter" a cineastic composition with elevating melodies and intensive mood changes.

Joel Forsberg returns to Traum to with a fantastic deep vocal track that can lure you into an emotional world with nice compositional elements.

Natives track "Pineapple Stories" is a weird and warped groove box of a track and in fact a great dance track filled with glitch+fx sounds which are dispersed with bravery.

Vanity In Mind takes up the strings but alters the quality with "We Are Stardust". You get a great hypnotic track here with understatement twisted in diverse directions.

de Graaf goes below the surface of things with "Uncertain Life" creating goose skin as well as building thrilling passages that make you dance.

Ikaro Grati has released two EP with us on Traum and here he present a new unreleased track that shows his qualities to blend different cultures, elements and dynamics to create this deep dish of techno music. Expect nothing less than what you have heard from him and remember, always check out what happens at halftime, thats when he runs hot!

Peter Shik joins our release with his track "Someone Else". Raw, energetic, analogue sounds showing their teeth but are smothered out by the sensual moments when his voice kicks in. All that makes it a unique piece of music you don`t want to miss

Sören Glashagens "Treiber" could be a cool curbed soundtrack for a techno party. Techno realism expressed and brought to life authentically. A whole techno night compressed into 5 minutes and 50 seconds. Wanna bet?

Max Coopers classic "Heresy" has been included here not only because of the 20 Year Anniversary of Traum but because we think it is a timeless track, we love.

Muni_mum evokes with "Beggar" the feeling of 4AD indie days. The track does a skillful balancing act musically between euphoria and sadness and that is great.

Acado formerly known as Techno Frühstück teamed up with Berlin's Modest Crow to create this lively and colorful tour de force. "Pueblo" feels like a big party with a lot of unpredictable things happening at the same time. Berlin funk, twisted and deranged... at its best.

Alex Smott & Mr Bosco contribute with "Somebody" the techno side of our release. Melodies that repeat themselves and are persistent enough to create a hypnotic state. Expect a certain timeless simplicity that can still take the roof of a club.

Jesse Somfay appears here with a classic we released 2006 on Traum on the "Interkontinental" Series. "Fabergé" could be regarded as a blueprint for so many melodic shoe gazing electronica of today.

A hard contrast and fitting perfectly is the track "Apollo" by Bandnd A, an amazing ambient chill out masterpiece. How can you listen to this track without dissolving into dust?

Chriss Ronsons "Switchback Road" directly caught our intention. The intro of the track really is amazing and the abstract level breathtaking. From broken eardrum sounds to a miniature world of comfort... this is a great voyage.

Mentat delivers with "Marble" a roller coaster of an arpeggiator driven sound worm with a Krautrock soul included. Get a grip on this one, it is amazing.

Estie from Düsseldorf contributes a gentle deep track but with a lot of forward motion and drive that will be appreciated by a lot of people that like our Thyladomid album. It does that with a sensual simplicity (being quite complex) where each sound keeps perfectly to its script. Great understatement and lots of emotion.

Our artist from the UK Glass Locus shares with us his track "Circular". Cool crafted melodies and mood changes executed with a lightness and natural flow which make it a real Traum tune. For all Max Cooper fans there is something hidden inside of this track that you might like.

Øro returns on Tour De Traum with his track "Nebula". Great melodic music with a mood, somehow undefined and vague and slightly urgent. This is what good music is made of.

Unstable Son defines the character of he track "Cubic Sun" with melancholic melodies and deep touching synth sounds. All happens here in cycles, repeating themes keep a tight arrangement. In the course of the track he makes bigger changes that give just enough impact to take you to the next level.

Ryan Davis "Gyration (Live Intro Mix)" is another classic we include here on the release. It has a descriptive sci-fi aura and a beat finish making it an extravagant listening track.

French artist Nanopix has build with "Quitter Cette Peur" a fantastic piece of ambient music that appears in the shape of a lively and complex mirage like cosmos .This is like a great Bosch medieval painting

Nebraska based artist Mo Mirxa returns with his track "Forever Mine" and whoever remembers his last great downbeat track on Tour De Traum XV will not be disappointed with this one either.

Dutch artist Kröhl establishes with lots of skill a deep mood slightly above downbeat tempo with his track "Modulate" and stresses a genuinely unique warped and deranged side of left field electronica.

TOJK has written an outer-worldly piece of ambient house music that can light up candles by the shear sound of it. Amazing enlightening music.

Ben Haviour follows beat wise in the footsteps of iconic Mike Dunn with "Bleached" and features top melodies in a post Detroit style. Twisted and futuristic in style that is rare.

Process from Brighton was one of our first artist on Traum and a close friend playing live as Process and later as Cosmic Sandwich. Here comes "Integ" the first track of his on our label almost 20 years ago.

Stiq return to Traum, this time as solo artists with their track "Organic". A track including sounds and melodies that put Visage in one box with Giorgio Moroder.

Nachap & Aimar deliver a haunting and massive track with "Tuphana". See the comeback of the drum roll and roaring full on synth sounds that describe a voyage with a quite mystic edge.

Uegi De Masu wrote a very emotional track with "Erinnern" that you can feel with every sound he squeezes out of his machines. Huge reverbs and pounding sounds shape a cool track.

Vridian have written with "Dawn Too Soon" a deep and melancholic track. The track leads you through melodic landscapes that are keen not to overpower you but sink in deep.

German young talent Roman Groschen has supplied us with "Das Brummen Des Telefons", which puts forward a raw vintage synth that reminds us of "The Circus Of Death" an early unpolished track by The Human League.

Southern Feelings answers with "Rising From The Asches" which shows a great performance of highlighting massive melodies before it plunges in to a dead cool break.

Marcovits "Fog Of War" hits with a bit of Joy Division feeling maybe not on purpose but reminds us of that dark feeling.

Even Midnight fascinates with his beetles and soothing ambient track "Sianamentend". The track has a classic structure of raising and dropping the sounds and levels to create a nice wave of ambience.

"Ex-TC" by Greendoxyn is a powerhouse of a track and a melodic "tour de force". The track is one big build up and makes the transfer from the humming noise of a machine to the madness of fighting sequences a plunging also into a 'dream state' of sounds... all being united by one big octave baseline. Join in be part of it!

Rowa takes a step towards the world of old school NASA footage as we know it from the legendary SPACENIGHT on German TV and provides a perfect soundtrack. Other than that it is quite clubby and can by a weapon on the dance floor.

With "Phantasma" Marius Drescher puts forward a cool groove linked to a tight arpeggiator and real played pads with a cinematic vision. Its core consist of a vibrant and hyperactive energy that at times dives deep to dig out an intense soulful mood.

Harada has been around in the German scene for years and is known for his minimal approach. He has send us with "Le Deep" a minimal groover that has just that bit of extra expressiveness to perfectly connected to the Traum world.

Draso has released so far on the Tour De Traum series the tracks "Fomalhaut" and "Farnsworth House". With "Mesh" he proves he is a master when it comes to shift moods from one level to the next one. Draso keeps a deep and passionate level also with this track.

D´Graaff has written a Joy Division like track. A mourning track that makes a crossover into lighter moments of deep house qualities but keeps returning to the melancholic side.

ARVØ refers to his music also as violintechno and illustrates this with "Northward Bound". The track has a melancholic and subtle feel to it but also proves to be strong on the production side. ARVØ shows a lot of knowledge to blend violin, acid sequences and a minimal groove structure to make it strong on the dance floor.

The artist from Egypt Hassan Abou Alam returns to Traum with "Distorted Reality", a vintage early WARP styled track that brings back the romantic side of that period we enjoyed so much. Don`t miss the 303 part!

Brazil artist Cleyss kicks off with a track that could be be described as a classic ambient track but instead is transformed into a melodic techno trance track. The metamorphosis of "Focus" and its crossover might not be for everyone but is quite special!

Ricardo Tobars "With You" came out in 2008 on Traum and we still play it at Traum parties and every time we play it a roaring sound comes from the dancers and they start to dance frenetically and people come up to us to ask who that track is from.

Another classic and legendary track we included here is Dominik Eulbergs "Der Purpurrote Sonnenuntergang Am Schilfumsäumten Bergsee". We still love the naiveté of this track, the melodies, the simple keyboard sounds and the direct hint at nature.

Patrick Calliztos track "Herbstrot" starts with thunder and rain and a relentless morphing sequence. Instead of making a transition into techno it is a 'techno symphony'. Patrick turns the into a 5 minute long sophisticated and musical non beat composition.

Tour De Traum XVI ends with a track by Ümit Han. Ümit recorded a 12 with us a couple of years ago but had switched to writing ambient music since then. He dedicated this track to the artist Daso who died at the age of 38 on 2nd of April 2018.