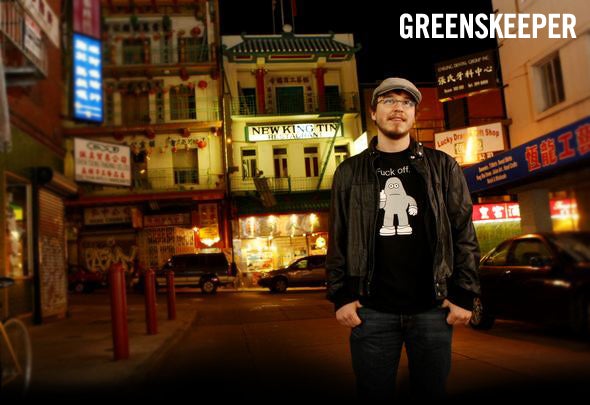 Greenskeepers' founding members James Curd and Nick Maurer grew up skateboarding together in Chicago in the early nineties. In those years, Maurer performed singing and playing guitar in various punk bands and Curd spent his time DJ'ing, holding down residencies with Derrick Carter. In 1998, Curd and Maurer got together and wrote the whimsical song "Should I Sing Like This" as Greenskeepers, taking their name from their shared employment at the time, caddying. It was Maurer and Curd's initial vision to have a good time, record it, and see if people would dance to it. They did! The tune became a hit amongst DJ's throughout the city and Carter signed the group to his Classic Recordings imprint releasing the song on 12" later that year. Gaining press support from the likes of Rolling Stone to URB, the Greenskeepers new and fresh take of mixing classic 20's swing with house and spinning it all together into one big twirling whimsical whirlwind caught the ear of multi-instrumentalist and producer Mark Share. While Maurer spent time traveling in Germany looking for love in all the right places, Share sat in with Curd to help complete the Greenskeepers first full length album "The Ziggy Franklin Radio Show" in 2001. Complete with skits a plenty, and a few tunes thrown in for good measure, "Ziggy" as its aptly referred to, put the Greenskeepers officially on the musical map.Many moons later, in 2004 to be exact, Share, Curd, and Maurer joined forces with the bass playing cowboy Coban Rudish who had performed with Share in a funk band in college, to work on the second Greenskeepers album "Pleetch," so named after an equipment malfunction coined the phrase. It was around this time that word of the Keepers Green crossed the ears of San Francisco indie Om Records, who ended up licensing the album from Classic for U.S. distribution. After licensing three of the tunes from the album to the hit show Grey's Anatomy, as well as locking down the Greenskeepers' remix of the Pixar/Disney classic "The Incredibles" theme song, Om decided to pursue signing the group for worldwide distribution of their third album "Polo Club." Recorded as a LIVE band from beginning to end, "Polo Club" stands as the first Greenskeepers release completed by all four members together in one place at one time. Already receiving praises for the songs "15 Minutes" and "Polo Club," this album sets the record straight and signals only the beginning for these four maniacal young men from Chicago.