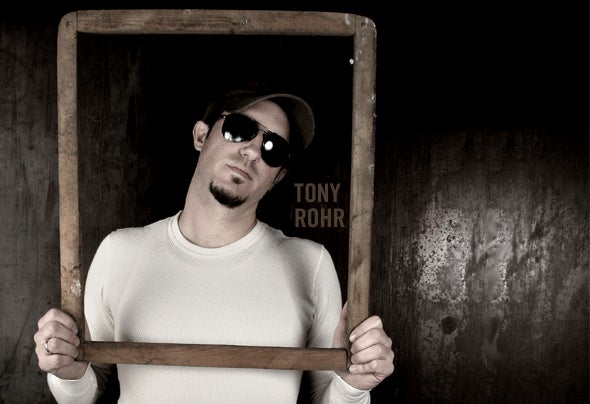 Born in the little town of Effingham, IL, Tony Rohr was always fascinated with new sounds and progressive music. However, all he really had access to while growing up was the radio. The local music store's selections were slim at best, and Tony began listening to the Beatles, Electric Light Orchestra, and his Parents disco collection. Then one day in 1982 his cousin played him a new album that would captivate him for years to come, "The Message" by Grandmaster Flash & the Furious Five. In particular, the song "Scorpio"... was like something beamed directly from space into his head and would inspire Tony to pursue music more and more throughout his life. Hip hop and then Industrial became Tony's main source of music growing up. He still hadn't quite found what he was looking for, but was getting close. Later Tony transitioned from being a scratch DJ into buying house and commercial records to DJ parties with. He began Djing at high school parties and then his first club in College, Stu's Surfside. Another turning point came in 1994 when he got his hands on Sven Vath's "L'Esperanza", the same year he went to his first rave and discovered techno music. DJing parties throughout the Midwest and finished with college, Tony eventually moved east to New York and tried his hand at production. Setting up shop in the beautiful borough of Brooklyn, Tony Rohr has since had a steady output of atmospheric, yet dance floor friendly releases. His sound often varies from release to release, which makes him very versatile as both a producer and remixer. He's recorded on labels such as Cocoon, Clink, Weave, Hidden Agenda, Tora Tora Tora, Electric Avenue, and Syndikaat. His Eps like "Yadda Yadda Yadda", "Was ist Das?" and "Baile Conmigo" have gone on to become underground anthems. Tony released his first full-length album in the spring of 2006 entitled "Tony Rohr Loves You All", showcasing all of his various styles within the genre. After being successful as a solo artist, Tony has gone on to collaborate with like-minded music lovers such as Paul Birken (Plurby & Etard), Dietrich Schoenemann (Side Four, TR & DS), Dave Shokh (as Dirka Dirka) and most recently Tim Xavier (Afternoon Coffee Boys). In addition to a heavy production load, Rohr has performed strictly as a live act since 1997 and keeps up a very busy tour schedule. He's played such legendary events and clubs as I Love Techno, Nature One, Awakenings, Chris Liebing's Spinclub, Kozzmozz, FUSE in Brussels and even the closing of the famous La Real in Spain. With releases, remixes and gigs a plenty, Tony shows no sign of slowing down. Continuously trying to push the envelope, he continues to strive for the freshest sounds for the dance floor.