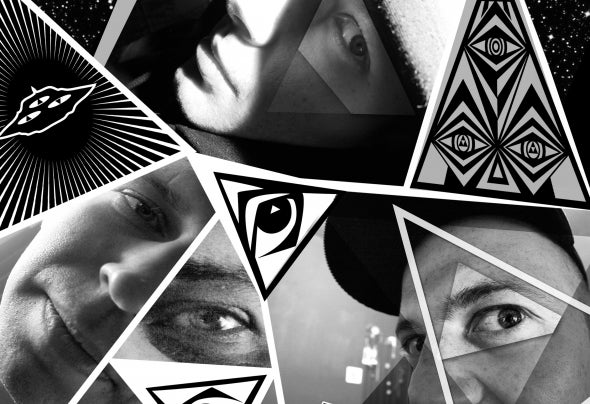 100% PURE MODULAR-ANALOGUE TECHNO Biography 20 years of music and friendship Description 3 different angles, 3 different pairs of ears, 3 different minds, 3 different sonic spears, 3 different angels , 3 different pairs of eyes. They Come to hypnotize you, their name Triangle Eyes! Knowing each other for almost 20 years, Konstantin, Misha and Alex decided to join their forces together in early 2011, backed up with each individual experience and knowledge of electronic music history, production and performance, they target is to create an ultimate techno live act based on 100% analogue modular synthesis. They want to share their own "trianglized" vision with a wide audience of electronic music lovers and keep it as much live as possible in order to give to each individual show an unique, unrepeatable and original feeling. Alex "Tolstey", Head of A&R, producer and art director of Boshke Beats Records (established in 2001 in Canada/Spain) With a broad of knowledge and many years of experience in the electronic music scene in general, He is worldwide well-respected producer and techno DJ working and producing with such artists as : Extrawelt (Midimiliz/Cocoon) X-Dream, The Delta, Fuzzion, Metalogic, The Rockitmen, Triple Distilled etc. Alex could be spotted playing in clubs and most important festivals all around the world, ether its Tokyo, Sao Paulo, Toronto, Barcelona or Tel Aviv. Konstantin Gervis- got 20 years of experience of playing in live bands from rock, synthpunk, industrial electronica, experimental noise to dub techno and noisedance- electro, his projects such Zvukoprocessor, Seventeen Migs of Spring, Penetrating Cranshaft, NTFG, ZV_K, gained a lot of respect in the underground Israeli and European scenes. His passion for electronic instruments, hardware machines and real live in real time with NO COMPUTER involved performance, made him one of the most respected electronic composers in the Middle East. Misha Handros-professional accordion, drummer and piano player, a great arranger and composer, a member in probably most known and important in Israel, alternative Russian rock band "Modelo Para Armar". A DJ and producer who is following the acid-house and electronic music scene since the late 80's, Who's lately had a various successful projects,collaborations and participation in some of the most important techno and house events in Israel for such promoters as Pacotek, N-Factorial,Legotek, Traumpunkt etc, releasing his music under the alias of Adeway on labels such Spanish-Boshke Beats, and UK's -Hype Music and Recode Records. http://www.facebook.com/pages/Triangle- Eyes/144635188955572 http://soundcloud.com/triangle-eyes-music http://soundcloud.com/boshke-beats-records http://soundcloud.com/adeway http://soundcloud.com/zv_k http://www.boshkebeats.com/ http://www.facebook.com/pages/Boshke- Beats/72659693086 http://www.facebook.com/pages/ADEWAY/281436595482 http://www.facebook.com/pages/zv_k/195493490508737