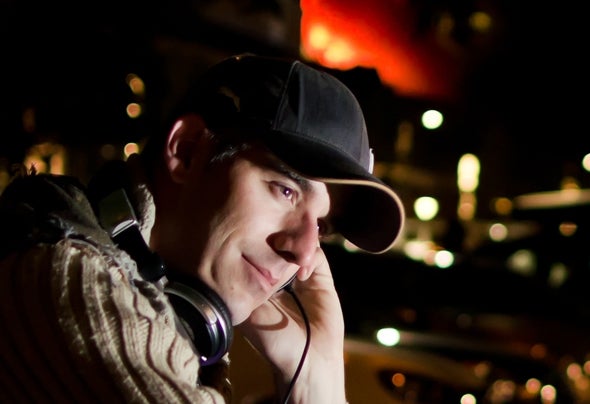 Steve Stevens started in the music world when he was 8 years old, at what time he was taking singing courses with the Petits Chanteurs de Laval, directed by Gregory Charles. Thereafter, he took courses in Latin International Dance Sport, which contributed in developing his taste for tribal and latino which expressed itself in his mixes and podcasts. In 1998, he began dance teaching in big parties with 700 to 2000 attendees, which occurred every Saturday night .From year 2000 on, the animation company Animafun Party from Sainte-Julie offered him a space within its team; the company had noticed the way in which he conducted his dance courses. From 2000 to 2009, he teaches and conducts parties where Disco was being played as well as commercial House, social and line dancing, including some Rock.In 2009, the Afterhours Chill in Montreal offers him a full time DJ spot on week-ends. Thanks to this residence, he was able to start his partnership with the departed Euphoria Afterhours in Gatineau. Since then, he fancies to become a professional in the music world, a universe that always fascinated him so highly!Steven maintains that he has not really sustained any particular influence from well known DJs. He values many of them. But the sting, he really got it when a friend of his who was a Montreal DJ, offered Steven to tag along in an Afterhours to see him and to hear him play... and that he could work on the turntables at the end of the night. But his music is mostly influenced by pieces with Latin flavour, Tribal (tam tam), Tech-house, Funky while not being too vocal or Disco and a bit Minimal.DJ Steve Stevens at this time is working very hard in preparing himself to become producer. He believes he can succeed owing to his music experience. He has many original ideas. And he wants to prove this in a near future.What makes him progress in his career? He believes that it is, first, a question of attitude... since his beginning, he never tried to do this only to make money. The important thing for him, is that his patronage has fun and that people dance from the beginning till the end. “It’s a crazy feeling when you see a crowd in front of you, with a large smile, dancing like maniacs on the sound of the music that I offer them. This gives me an experienced energy which gives one the need to see these people coming back again to listen to my music”. Of course, sooner or later, this work must eventually be rewarded.Very friendly by nature, cheerful, always listening to his fans, Steven believes that this greatly contributes in his being more and more recognized in this environment. “When your people feel you are with them on the dance floor, it helps a lot. But the day where you are not felt anymore, it is the end, you lose. I sincerely believe that this will never be my case”.What DJ Steve Stevens find most difficult in this profession is to make his mark, to be recognized, to have enough « bookings » to make him seen and heard. “Success goes through perseverance. When there is a will there is a way. If you believe in yourself, everything is possible. I believe in myself and I know that my career can take me very far if I work hard!”.Evidence of this is this first night as the invited DJ at the STEREO on Saturday January 7, 2012. When he started talking about this project, many were telling him this had no sense. It has been more than six months since he started planning for this event. His friend Jean-Francois Boucher (DJ G-Feex) and him both have the same dream for many years, which is to play at the House Music Temple, the (((Stereo))). So imagine the joy when, a few weeks ago, the confirmation for this night came up!For 2012 and for the future, Steven contemplates many projects. His DJ career might very well transform itself into this of a DJ/producer, as bookings propositions are already under way for Quebec and Ontario, on top of a radio offer in Europe and some bookings out of the country. Three words defining his music?Happy, Funky and House.