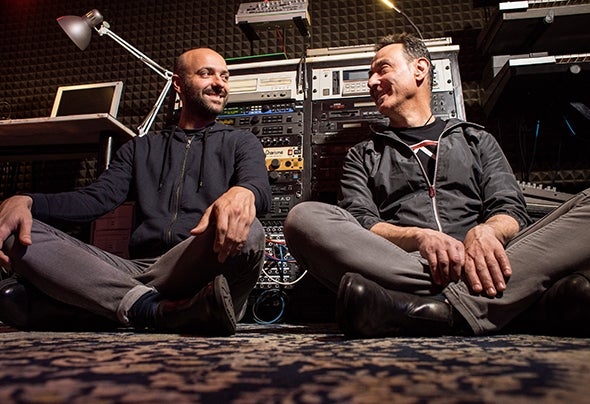 A name that recalls an ancestral origin, such as that of tribe. The union of men and women around the rhythm. But this musical union, although initially spiritual, is physical and concrete one. With a clear objective. The search for a new style without compromise. The continuous exchange of ideas between different generations. A project that was born in the fracture that we live today between those who experienced dance music in the 80s and 90s and those who had to reinterpret it starting from the 2000s. A spark that arises from the union of the well-known Italian producer and dance music DJ Alessandro Del Fabbro (Golden disc with the Mabel project), and a young talented music rebel Gabriele Bartolucci, both coordinated and stimulated by another young rebel as Daniele Vergamini.  The union that makes strength, the creativity that develops between two generations and different styles, which contaminate each other and nd a new expression in Tribalanza, a tribal-dance-alliance linked to the groove, disco, funky, deep, dark soul of techno. Their world is based in the beautiful and small town of Pisa globally renowned for the tower, and so, no Detroit, Chicago, New York or even Berlin, no famous venues, no exciting parties, just small but really authentic and pure things. Two avant-garde studios, instrumentation and equipment by top players put together piece by piece, year after year with sacrifice and a lot of passion. There are no exceptional stories behind it, there is only so much seriousness and dedication, commitment, and will. Their straight approach to music is rejected in the environment to which they belong and which they live on a daily basis, giving one the best possible chance of self-development, the most innovative and characteristic element of their project. There’s no scene-dictated view in their work, there is only a pointed emphasis on new ideas, creativity, style, groove, and love.