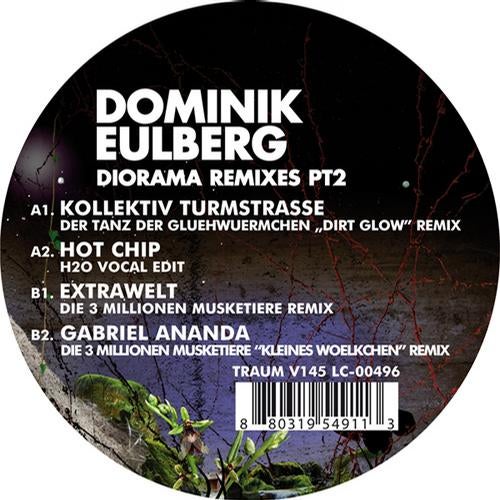 The second part of the Diorama remixes offers again some of the finest producers around.Starting with Kollektiv Turmstrasse! What kicks off as a Chez Damier groove makes the transition into a loose dub monster.Collecting traces of the original sound and dispersing them with magic movements we see why Kollektiv Turmstrasse are a top act.Shifting the attention from the front to the far back from the obvious to the abstract... Turmstrasse create that parallel groove on top of the groove which seems to tighten up with every minute.Fine particles of sounds are sprayed onto the relentless groove and make it a real crowd pleaser.An amazing remix comes from Hot Chip who have remixed H2O. Bubbling synth sounds meet the melodies of the original, resulting in a laid back tune that makes contact to the melodic Detroit Techno such as exercised through Red Planet and UR productions by Mad Mike. The airy and breezy parts are due to the fantastic vocals of Joe Goddard and the elevating and heart braking synth sounds by Felix Martin that seem to come from the middle of the earth to surface at times in an enveloped euphoric movement. There are three versions here, make sure you listen to the extended version as well since this shows even better the spiritual side of it, it is a digital bonus since it was too long for the vinyl. There is also an instrumental long mix for all of you who would like to hear the pure synths.Extrawelt have remixed Die 3 Millionen Musketiere and have improvised on the original melodic theme, extending it... taking it successful into another played direction, leaving behind marks of gloom... all silvery and white as momentums.Reciting old school Chicago house here, using disco claps and early UK rave elements, it is kept in the style Extrawelt are known for with their recent releases.We believe him when Gabriel Ananda says he will turn the original more into a club track. There is no reason why he will not make this happen... since he is a man of virtue and a true believer and a close friend of Dominik Eulberg having released together with him on Traum three times already. Gabriel twists sequences like mad, uses feedbacks and a bit of muscle... all of this accumulating in the suffocation break down, a real highlight as Dominik has put it.Rones remix of Der Tanz der Gluehwuermchen came in last minute. Rone has been coming strong with his music and has been supported by Dominik Eulberg for some time now.The remix recites the original but launches into an improvisation adding other chords mixing the theme up strong.On the Diorama remixes pt 2 we also offer a third version of Teddy Tausendtod by Stephan Bodzin in the break beat Zebra version.