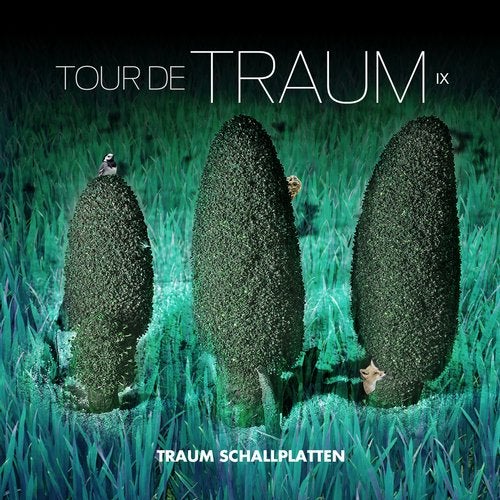 With the Tour De Traum IX we open another exciting chapter of music on Traum with tracks by new artist we selected over the last 6 months and tracks by artists already on our label. We are happy that so many artists trust us that we will select music which is ruled by musicality and a free spirit.

You will find very cool modern electronic listening music again, but this time there are lot more deeper electronic cuts than on the predecessors included. All was compiled by Riley Reinhold who also contributed the two continuous DJ mixes in a workshop fashion.

German producer Stephan Funkmann opens up the 9th Tour De Traum with his amazingtrack "Kaisermantel", a track that sparkles with a composition of sounds, where melodies are thrown up in the air like of water fountains.

Madrem picks up the vibe, more stream like with his track "Inner Affection" establishing a tidal motion he skillfully works within this restriction with perfection.

Kohra & SHFT quickly enlarge the composition to a wider range of melodies and sounds in a breathtaking complex composition, still to be contained by an inner peacefulness that provides a lot of strength to the track.

Hansgod release on the Tour De Traum VIII and reestablishes his profile as a top upcoming artist. The track leaves us in the dark for a long time before it unfolds a meditative beauty which reminds us of some of the best ethnic spiced up British techno from the north of England... which has had a great influence on the people behind Traum.

Nick Dows track "Before The Feast" taken from his "Armour Plated EP" follows and his ghostlike melodies wander in our heads ever since he released the track with us.

Luka Sambes track "Locus" has a heavenly feel to it. It is very much a gloomy and winterized track which is put into motion by mighty dub baselines.

Bodega makes wide strides with his track "Bubak", all proud and ready for the big leap. A mighty mover in the right moment!

Peets "Father & Son" in the Microtrauma remix is a track we have been playing on dance floors up and down the River Rhein and it has never failed to rock the crowds in a big way... so it had to be included on the Tour De Traum IX.

Cosmic Cowboys "Symphony Of My Life" is just as the title conveys a a superb symphony of a sweet tune that could very well make hundreds of clubbers happy and humming along. But be aware behind all that sweetness stands a football field big baseline!

Parra For Cuvas "Elara" has won the hearts of many already so we had to include it here as well!

Paul Bart has already contributed to the Tour De Traum VIII so we are happy he had another fine tune for us. It does not take long before the drums are perfectly absorbed in a track that combines the repetition of the arpegiator and written melodies in a gripping way.

Scottish duo Ariose have also released on Tour De Traum VIII before and have remixed Nick Dow for Traum so we were expecting nothing less but greatness. Their track "Flood" always makes it into the private jukebox at Traum. The manifold of sounds such as intermediate micro sounds to lead sounds and heavy baselines and details make it a stand out track.

"Kleines Mausohr" stems from Dominik Eulbergs last EP and you can just feel how different it is from so much music around when it pours out its melodies.

Arno Motzs track "Verandering" starts unlike you would imagine it to with distorted drums and surreal sounds. And despite the hating melodies which then come in, it makes even bigger changes towards a friendly acoustic piano melody. The changes here are quite remarkable and it all makes sense!

Ri Za has been with us for a while on Tour De Traum releases always writing cool music. Here we have picked up a brand new track which he wrote with new bought equipment, it has nice tempo changes that range from Latin flavored sounds to the deepness of post Detroit techno. If that sounds weird, listen and you will see it all works hand in hand in a nice way, drawing you in, the longer you listen to the track.

Silverclub & Batfinks come from Manchester and have written the tune "Kloser Konnected" which we feature here. Silverclub are a indie band composed out of: Duncan Jones, Henrietta Smith-Rolla, Gareth Carbery, Nick Cotterill and Ian 'Budgie' Jones whereas Batfinks released quirky, upbeat electronic music himself. "Kloser Konnected" has the meditative quality of CAN and the rawness of the Inspiral Carpets, but for sure it twist and turns in a glamorous way or rather like a goldfish on soil in the heat of the sun.

Luc Angenehm, has already contributed two times on Tour De Traum. His track "Korona" created big waves and we see in "Walhall" another great piece of music. The track has an almost sacral feeling to it due to the exceptional voices which make their way under your skin. The break down sinks deep, flips over like heavy lead without any help from your friends.

Usmev from Barcelona has releases a solo EP on our label MBF LTD before which you should check out. His new tune "Tanzfläche Unter Den Sternen" is by all means: a slow rocker, a beat driven piece of music, with a delicate disco note that undergoes a transformation and ends up as a "played". Piece of music with a lovely melancholic/happy note.

Florian Gallet is a new discovery for Tour De Traum and directly installs a breathtaking musicality. It feels as if Debussy and (early) Pink Floyed were making music together and had David Bowie joining in. Wow! An epic piece of significance!

Cyrill Luzins debut track on Traum is "Anesthesia". The track is is a super sensual track, composed in a way that in the course of the track more and more elements/instruments are added, resulting in a wonderful climax.

Gedna has written the episode like tune called "You" which for us expresses morning glory through a loose and relaxed composition based on a downbeat and great spoken vocals.

Jahara is a new alias of an artist we have worked with, now a secret we will later make public. A stunning performance and a super flow of melodies and beat structures shape a sophisticated "merry go around" you will end up whistling to yourself.

Talal & Zoi make their debut with "Snow White" a track perfect for cold winter nights. With cocooning warmth and sounds that are destined to come from far away and to arrive in pieces like comets, the track shows incredible deep moments.

LetKolben reveals intricate knowledge of programming delicate perlonesque beats with his debut track "Dance With Charlotte". For the ones who like real played instruments Letkolben shows that treat as well. So expect this to be a top one for the DJ.

We were recently reminded of the brilliant remix by French artist Rone for Max Cooper, so this one was added here as well.

Reinier Zonneveld has had great trax on Tour De Traum so far, trax that change their direction and grow together and "Elastic" is one of them. It is less DetroitStyle then his debut on Tour De Traum, instead its melodies are more cosy and happy but keep the complexity und unpredictability.

Loui Cleghorn gives his debut on Traum with "Quand Je Pense À Toi". The jazzy polyrythm of beats and sounds is amazing. The selection of played sounds and the composition is stunning and we are sure we will hear more from Loui on Traum.

Luis Bondio has written a big tune for the DJ who plays bigger locations with "Looking For Home". Great spacious stereo recording with an emphasis on the single mighty circulating sound. But be aware there are also moments where the sounds create a thick layer of sound like a clouded sky. This track could be amazing played outside.

Oliver Gruens track "Nebula" has the energy of a rocket leaving earth with no goal but reflecting on its sheer determination to not stop until it runs out of fuel. There are times when it it takes up melodies that could be related to space and the universe or Dr Who. Great storytelling and composition we think.

Macajey released on the last Tour De Traum. His new track "Come On Over" is very different to its predecessor more jolly and spaced out. It is very detached from all claustrophobic apocalyptic music around and at the same time it is no pleaser but a song that says: "YES"

.Extrawelts "The Inkling" is a bit of a "heavyweight" usually people appreciate it who have heard a lot of music in the past and can link it to things, or people with a broader artistic background. We were exited to weave it in with the other tracks and see what it does.

Masahiko Inui released on Tour De Traum V the track "High Spirit" in December 2012 and returns here with his newest invention: "Mysticism" which draws on characteristics of the original minimalists of the 70ies such as Steve Reich and Terry Riley and even Derrick May. He has created something totally unique.

Conspirations "Binary Valley" is one of these tracks that seems to be born out of a broad appreciation for music and music making. There is a lot of passion in this track. Is seems played and has that intuitive feel to it we like so much.

Subbirds track "Untropod" is a blend of soundscapes that could be judged as a soundtrack for a philosophical Science Fiction a la "Solaris" and deep house elements. Sounds hard to imagine this could work, but it does and its finest moments are when both sides nearly collide.

Felix Harreus track "Zeitwerk" evokes some of the finest electronic music from the past and transports it to 2014. It has the sternness of Kraftwerk, the playfulness of Bochum Welt and also something very light a naive.This is great because it is all laid out out here to enjoy even if you don`t know the artist mentioned.

The duo Trashlagoon released "Prophets like us" on Tour De Traum VIII. With "Occupy" they confirm their amazing skill to cross genres and borders to create a hybrid for which the music world has not yet found a name. "Occupy" is an odyssey into the experimental, touches the psychedelic world of White Noise "An Electric Storm" but keeps going to connect more genres from the field of contemporary new electronica. Listen and enjoy the symphonic and stereophonic world of Trashlagoon.

Back into the mode of 4/4 beats and their sexy limitations with TrockenSafts track "Manhattan 42nd Avenue". The track is a beat monster taking in Chicago house and disco influences to create a superb hypnotic groove with nice abstract sounds.

The last track of Tour De Traum IX comes from Thomas Bjerring who has released with us as a solo artsist and has contributed before to Tour De Traum. "Piona" is a complex composition that connects pop music with ambient and techno house, defying genres really for the sake of individuality.