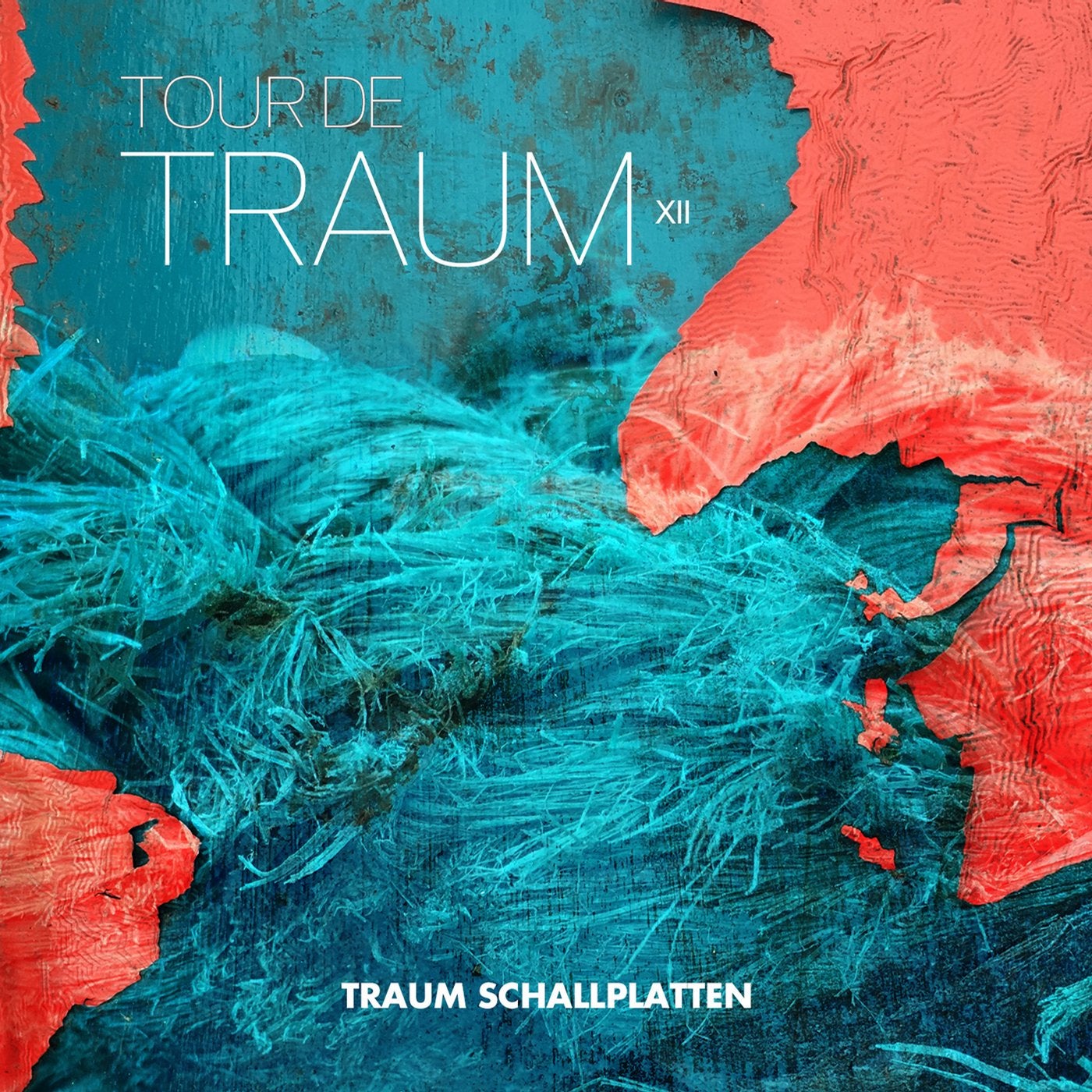 Our next Tour De Traum sees contributions coming from all over the world! Stunning music sometimes produced on a laptop and sometimes recorded in top studios by well known artists.

Tour De Traum XII opens up with a track by Jake Chudnow who some of you might know him form his successful YouTube channel and his participations on Fabrik mix CDs.His tremendously addictive melancholic hymn of a track "Jake" evokes the spirit of music from the likes of Nathan Fake, Nick Dow and other artists who find themselves placed in the genre of shoe gazing electronica.

Anders Rosengren has the aura of Minilogue also with a long history in the psychedelic scene under various shapes and explores here with "Ametist" soundscapes that manifest in a hypnotic sound cascade and a driving beat.

Extrawelt remixed Mario Hammer And The Lonely Robots hybrid track "Mono No Aware / L'esprit De Lescalier" for the Traum V200 release in different versions.Here we feature their technoid "Tool 3002" for the first time.

Pysh, dedicated DJ and event organizer, is also the winner of a music contest organized by Booka Shade. His track "Daradara" exhibits hypnotic floating structures and blends them in a mesmerizing way with modern cut up collage structures. An acoustic experience!

Øro starts out with his track "Christine" in a fashion that reminds us of our Traum all-star artist duo Broker/Dealer. Warm rays of sound join in with vocals that tell a sweet story.

Lesniar provides us with "Sun", a track that could be coined as a lounge track with fierce percussions.

Dan Barber merged classical guitar with electronic blips and sweeps. He spent time in London and has received positive feedback from Max Cooper for his remix of "Haze". His track "Looking Over" feels like heavy guitar feedbacks from Seattle's SUB POP meeting the heavenly melodic side of a Mr Fingers! Mind-blowing!

Shewasasea is a Japanese ambient producer who has become famous also through his aliases Moshimoss and Preghost. His track "You (Youuuu)" has the elegance of previously released Egokind music on Traum. It keeps a stunning playfulness and melodic interaction of melodies that blur and melt into each other by a masterfully crafted artistic skill. This is a track for the heart and synapses that need to recover from damage.

Dovim has arrived and is a core artist of Traum after releasing his splendid "Cryo Gemini EP" in February with us. We highlight here again the unique piece of a language we call "melodic robotic". Enjoy "Frozen Receptors"!

Saccao & Anturage have both been successfully releasing music separately worldwide and have also already gained respect for tracks produced together and we know why. "Brainfeed" is an outstanding track that has the exotic magic of a track like "Magic Fly", it creates something similar airy and fascinating.

We welcome back UNFUG, the man from the North, with his baroque kraut ballad: "And Thus The Flow Will Never Stop". A fantastic voyage through progressive rock that has long lost memories surface and bloom in full youth.

Olaf Stuuts track "Shadowgraph" has accompanied us on our various Traum showcases and it never let us down with the medieval spirits walking through the track. So it had to be on the Tour De Traum XII.

Benwaa grew up on a small island off the coast of Whales. He has been obsessed with music since an early age and this is revealed in a magical way also with his haunting track: "The (W)hole That Is Not Whole Without You".

Born and raised in Kairo Hassan Abou Alam has recently explored the down tempo genre after producing darker techno. "Generative Dialogue" shows that both genres can work together in a fascinating way.

Riamiwo has been on several Tour De Traums and his new track "Transferfrequenz" is a huge track for all "E2 E4" lovers out there. There is a lot of Ash Ra Temple or better Manuel Göttsching in this track and that is just great.

The ancient spirits of the early Aphex Twin are evoked here with Graumanns "Culm" and eternal fires make your face shine. Hailing from Istanbul Grauman has released charismatic music on labels such as Manuel and on his own label.

Kai Meyer is back with another cracking piece of music. The young Bavarian producer is on his way to establish his music on Traum with "Fliegen" and more to come. Inhale!

We also welcome back the Dutch producer Audio Mill who releases his second track on Traum here. "Setna" is an amazing audio experience as well as a strong production that captures happiness and sadness as it is dropped on us from heaven.

Dominik Eulbergs track "Unechte Wendeltreppe" is taken from his recent Traum EP and has that rave feeling implanted big time. If you have heard him DJ you know this track has a place in his sets.

Nick Dows "Smokes" is a favorite for many so we include it here. It has an abstract level to it which has lately been a force with Nick.

Grojs "Follow Her" in a Mario Hammer And The Lonely Robot Remix is unreleased and transfers the original into a piece of ambient & electronic noodeling Mario Hammer is so good with. Perfect for summer nights with fireflies.

6A8 is member of the most important alternative new wave band in Israel: Modelo Para Armar. He is a professional drummer and has been focussing on 6A8 since 2013. "Ground Control" is a synthesis of driving dub techno and electronica laced with heaven like synth stabs and acoustic details that altogether create a fine spirit, like sun rays cutting through a clouded sky.

Occam played with his band Zagar across the globe, being voted as best electronica act of Hungary by the IFPIS Fonogram Awards. His music has been referred to as the spherical sound of cobble stones of eastern European streets. His track "Metamorph" however might be described as an exciting composition of evolving sound shaping, exercised with the urgency of post Detroit techno to the point when Occan unwraps glamorous lead theme melodies turning any space into an ecstatic rave.

L.A.S.H.A., the Georgian artist formerly known as Jacob First has written with "Surrounded By Textures" a slow groover! His sensual melodies that keep emerging, spawn a mood of exceptional deepness that can totally absorb you.

The young Italian producer DVKA has a strong feeling for producing experimental electronica. "Digital Future" shows his phenomenal skill of composing slow emerging minimalism with mind blowing successions of sounds. All very rhythmic and with style.

Le Tarsier aka Axel Rigaud combines analogue synths with live wind instruments and contracts soundscapes in real time.At the age of 6 he began saxophone studies at the Châlons Conservatory in Champagne and has meanwhile also graduated from the Paris Conservatory. His piece "Inner Dirt" has connotations to post Detroit techno but rather seeks its brilliance in the formulation and blending of different influences. One can feel Steve Reich as well as more contemporary musicians.

Draso the artist from Melbourne has successfully released two times before on Tour De Traum. His track "Invisibilia" is his newest encounter into the deeper side of dub techno. Tasteful deep textures that grow on you strongly.

Influenced by soul music the DJ has recently made steps into the recording world adding his knowledge for the hypnotic groove and the deeper side of techno of techno house music. He holds a residency at Bar Plastique in NRW Germany.Safado has a nose for introspective sequences and melodies that never surface but keep the sexy understatement we know from Ricardo Villalobos.

Ryan Davis / Microtraumas "Harmonia" was released on the last EP of the trio. It is a favorite of ours and we wanted to feature it here again.

Dominik Eulbergs "Sansula" in a Max Cooper remix pops up frequently in our hit lists. Listen to this Traum classic.

Soma is a project born in London in 2013 by Sebastián Huneeus which switches between ambient, IDM and experimental moods.Sebastian is also founding member on New Layer a project which brings together visuals with music.His track "Eme" is a piece of dubbed out slow beat music with an electronic soul par excellence. Envision a fine cross over of soul, jazz and sountrack-musica and you know where this could lead you to.

"Wetherby" is our favored track by Padre. It is a heat wave of an electronic track that you should not miss.

Talal & Zoi - Haling from Pakistan with releases on Kindish, Dirtybird and Traum "Take You There" is the second contribution to our label and again a unique one. "Take You There" is a sonic, psychedelic, bloomy but semi-dark piece of genre bending electronica. It is a soundtrack as well as an ascetic way of life.

The Hamburg based vintage synth addicted musician Hannes Rasmus has written with "Kleinste Teilchen" a track we released on his second EP with us. Now we re-release this track for your pleasure.

Stefano Secci & Luca Cudranos "Vision" is as sweet and tasty as honey and works with a dream like coating that makes it an exceptional rich piece of music.

We released Luis Juniors "Otro Ayer" on Traum before and throw it here into the circuit of new music because we know it will perform nicely and will add something to the tracks here.

With the duo Microesfera based in Buenos Aires we return to the birthplace of Traum. Microesfera are best known for their releases on Mule Musiq, Kompakt and Static Discos. "Dalmatians" is a fusion of deep house and electronica fueled with sound loops, acid sequences and micro elements that results in a nice stream of multiple atmospheric sounds. Slowly but gentle and by repetition they make the way into your cortex. The archetypal approach has caught our attention here, sometimes it is the best way to feel music.

The versatile Kurtz aka Bernado Di Sabatino is known for his complex compositions which have brought him international fame."Make Feel" also marks stages of a voyage starting with Tangerine Dream/ Klaus Schulze like sequences and then moving into the genre of deep house but keeps and develops the melodic side with lots of skill.

hajoso's "Violet Downtrip" kicks off like an intro of an indie band before it gains a clubby feel with aspects of a dream like state that installs a soothing & floating quality which is very peaceful.

Mr Dello is well known to people in Greece for his participation in some of the best clubs there. His track "Gamla" gives like to giant Basic Channel like chords which he implants into a lively rhythmic section and hereby making a cross over into house. The nice repetitive structure has summer jam quality.

Luke Mandala has released with us on Tour De Traum before. He has also released with Dave Seamen, Booka Shade, Manuel just to mention some. As the title "ShmiggleWiggs" suggests this electro-house hybrid of a track is not for the weak does it include a lot of weirdness and daring elements. As you can imagine we always strive to have a track on board in that style.

Luc Angenehm here collaborates with Deep Suite aka Gary Pilz from South Africa who is interested in fusing organic elements with electronic sounds. This multi faced production includes notable vocals which give the track the title "Abgehn".

youANDme - residing in Berlin, run the label Rotary Cocktail and are famous for their dance craze music with releases on Desolat and Cocoon and remixing artists like Kollektiv Turmstrasse, Florian Meindl, Radio Slave, Moodyman, Steve Bug and more."Submersion" is one of their rare beatless ambient trax. It has its focus on a dramatic & evolving post Detroit string-theme and a steady form of of modulation which provides "Submersion" with the drive to include this track also to DJ sets.

We close the Tour De Traum XII with NIKKNAMEs track "Pilot", a fantastic ambient piece and a soundtrack with a strong note of classical music. There is a blend of excitement as well as positive tension that rules the track.