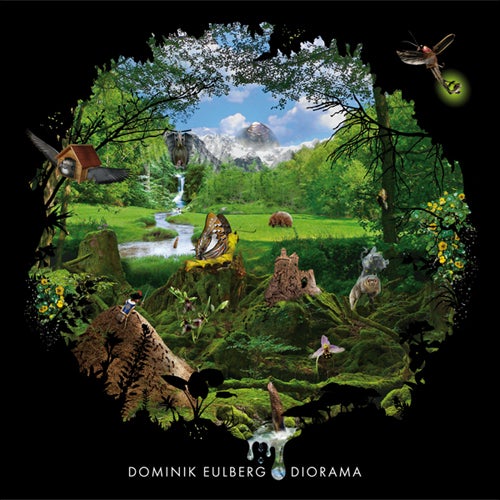 Exclusive
After a full year of dedicated work we are happy to announce that Dominik Eulberg´s fourth album "Diorma" will be released in May 2011 on TRAUM. After the "Heimische Gefilde" album on TRAUM, which won the German critic award, as the first techno album ever where comments by the artist himself appeared in spoken word, Eulberg has this time aimed at an album which embodies various facet's of electronic music. "Diorama" therefore resembles something totally new and original and can be referred to as an affiliation towards the real "authentic" Eulberg sound cosmos.He has accomplished this with the highest possible standard and contemporary sound aesthetic.Eulberg has set the bar at an extreme height for himself and the result will pile-drive even the die hard fans into solid rocky soil.Eulberg has unbuttoned his "techno coat" and has come up with timeless electronica, no one would have expected of him.It is his first album where he has rather played music instead of manipulating it and holds up that skill from the very beginning to the very end, non stop.For "Diorama" Dominik Eulberg has selected in cooperation with Germanys nature magazine NABU the eleven greatest wonders of domestic nature. Because it is not only in exotic parts of the world that one can find incredible innovations of nature, they can also be found at your front door.Their existence is concealed for many of us and only by means of closer examination and an raised awareness for their secrets can we discover this world full of miracles.For this world of hidden wonders a graphic diorama was specially designed. Depicting a well known world full of unknown phenomena.For each wonder Dominik Eulberg has composed a piece of music, which reflects with sound and dynamic the accounted wonder.In addition he describes the eleven phenomena in a traditional way on the inside of the CD cover."Täuschungsblume" The opener of the album depicts an enigmatic musical anecdote.Time seems to stand still here. Slowly but with continuity the melodies descend, evolving in an never ending flow. "Echomaus" "Echomaus" reminds us of the greatest ambient moments by Aphex Twin. The track works through elegant creeping sounds, creating a fine balance and includes echo sounds and electronic sounding basslines that make the connection to the wonder as well as creating a epic track of great radiance. "Neunauge" The abrupt transition of the "Neunauge" (engl. lamprey) from a wormlike larva to a fish, is reflected here musically in a strong dynamic change, turning things upside down... making it two tracks in one. One could call it a musical version of the wonder itself. A risky and adventurous track that creates new space and clears the mind for the next track. "Teddy Tausendtop"The wonder of "Teddy Tausendtop", the clumsy water bear, is an tempting blueprint for Eulberg to pull all his tricks. He here composes brilliant beats and uses synths that create a timeless atmosphere as well as using others that make huge dynamic shifts evolving in a magic piece of music which is a wonder in itself. Without words a masterpiece! "Islandmuschel 400"Maybe the most intense track of the album, going deep under ones skin. A track that has the aura of an approaching gigantic iceberg from the perspective of a child. This track could be a massive tune on big festivals, a big time instrumental pop song. It is very personal and fuelled with fate. "3 Millionen Musketiere" This track is for all of us who experienced the genuine collective feeling at one of the raves in the early 90ies or at small parties in industrial sites when the first sunbeams made their way through the stained glass industry windows. This track is euphoric up to the limit: A break beat that incorporates the best moments of UK techno with bands such as: Enjoy or Bizarre Inc, but transfers it into the year 2011. This is a track that creates gooseflesh. "H2O" What would the world be without water? Every life starts with water and so Eulberg has written a track here that features the complexity as well as the beauty of this element. Eulberg has composed such an intricate track here... it goes beyond recognition. This track has a central position in his album. "Der Tanz Der Glühwürmchen" After "3 Millionen Musketiere" and "H2o" this track seems to have a recreational quality in the beginning but in the course of the track turns out to be really emotional. Picking up a feeling that New Wave or Indie Rock tunes hold, this track reveals the quality of the album altogether, the timeless quality of some of the trax. "Aeronaut" Starting deranged and giving no clue in which direction it might proceed, step by step he introduces lush melodies detached from all earthbound actions.All of this would not work if Eulberg had not programmed one of his best beats ever... a complex abstract beat that massages the synapses. "Wenn Es Perlen Regnet" "Wenn Es Perlen Regnet" is plea for the beauty of nature and the world of melodies, that few artist can translate into music. This track blends romance with techno reality. "Metamorphose" "Metamorphose" signifies what Eulberg has actually intended with his album and what has been responsible for the outcome of this album. A tongue in cheek title and music that shows great French movie soundtrack quality connected to Eulberg beats. The end of the CD but a track of timeless beauty.