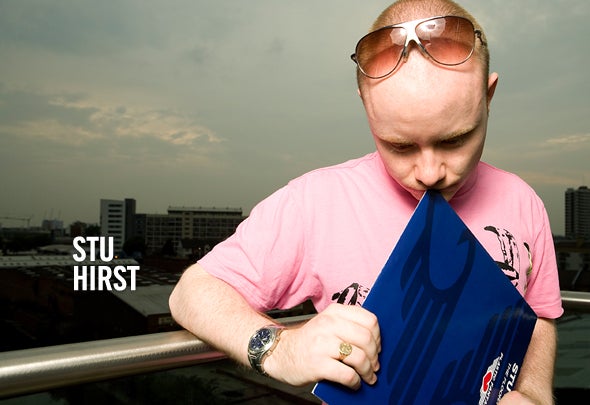 DJ, Producer, Remixer and Label Owner Stu Hirst has firmly established himself as one of the World's most exciting talents, with over 40 underground hits and remixes on some of the Planet's biggest labels. Stu's first release "Rhythmique" gained numerous plays from Pete Tong on his Essential Selection show, as well as being one of Steve Lawler's closing records in his sets throughout 2005. It was included as the final record of the Lights Out CD Compilation series, released on Global Underground and was also licensed to Moguai's World League compilation. Lawler described it as "a truly amazing record" and charted it at number 3 in his all-time Harlem Nights tracks. Further releases were forthcoming on heavyweight labels such as Subversive and Distinctive (under the name "Ourhouse"), Plastic Fantastic, Fantastic House, Limbo and Baroque, gaining widespread club and radio support from some of the World's biggest dj's. Ourhouse's "Dropout" received two plays from Annie Nightingale on Radio One and was included in Distinctive's Y4K Mix compilation (as well as the being included on the vinyl sampler) and "Jackin On" was supported by Tong on Radio One. The Trophy Twins also gave "That Feeling" multiple plays on their Radio One show in March 2007. Tong also supported Stu's mix of the classic SL2 – On A Ragga Tip. Remix wise, Stu has worked for labels such as Saw, Deeper Substance (reaching Balance Promote Chart Number One), Global Underground, Limbo, Level (with plays from Jules on Radio One), Climax, Adjust and Red Recordings. In 2007 & 2008, Stu released tracks on some of dance music's most important labels, including Global Underground, Toolroom, VIVA, System and Baroque. "Big Rooms Bigger Tunes" and "Saws And Sines" both featured on Global Underground's 2007 compilation "GU Mixed". There were further releases on Forensic, Roccoco and more work for VIVA Music. "Cambio" was included on Lawler's Renaissance Viva Toronto Compilation. Stu then signed to one of dance music's largest and most prestigious labels, CR2, remixing Essential New Tune "Sunshyne" by James Talk, for the label. His "Clap, Snare, Repeat" track was included in the 2008/09 Winter Sampler and also on the 2009 Miami Compilation and played on Radio One. 2009 sees Stu release two seperate singles with CR2 as well as being part of the Live & Direct World Tour Roster. His "Roll" track is also due as a single release with Global Underground and there are a flurry of tracks coming out on Plastic Fantastic offshoot, Cohagen Records. Stu also runs 7 Inch And Single Records, an outlet for his own music. The first release, "Less Is More", was licensed to Dave Seaman's Renaissance Masters Mix. Previously, Stu ran Strawberry Blonde Records, which had over 15 releases before giving way to the new label. To support the labels, Stu presents the Strawberry Blonde show on leading electronic internet radio station Proton Radio and also the Stu Hirst Podcast (currently with over 3000 subscribers and growing daily), showcasing the label's output and a taste of what can be heard in Stu Hirst sets around the Globe. Stu's Proton shows are regularly amongst the most listened to on the station. Stu also hosts a monthly 3 hour show on Danceradioglobal, another of the leading Internet stations. DJ wise, Stu is no stranger to success, having beaten thousands of hopefuls to win DJ Magazine's Mix Competition in 2003. Stu has appeared at some of the finest clubs in the World, including appearances at three Closing Parties for the mighty Space in Ibiza, Global Club in Lithuania, Amsterdam Dance Conference and many more, including La Mania (Romania), Privilege (Ibiza), Nautilus (Latvia), Gravity (Lithuania), Piekarnia (Poland), Ministry Of Sound, The Cross, Heaven, Turnmills, Colours, Progression, Do This Do That, Glam, Storm and Inside Out. In 2006, Stu mixed the covermount CD for Baltic dance and lifestyle magazine "Flash", and toured Eastern Europe to promote the mix.