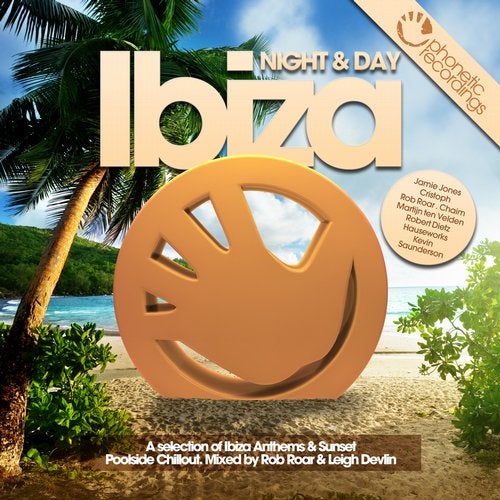 Hot off the back of 'the best Ibiza album of 2014', Phonetic Recordings proudly present the brand new Ibiza Night & Day.

A selection of the finest tunes making waves on the white island. mixed seamlessly by Phonetic CEO Rob Roar and Leigh Devlin of Minus Blue fame.

Rob Roar has a pretty impressive track record when it comes to big Ibiza hits. As a producer, he holds the record for the most Ibiza No.1 hit records of the Summer under his Max Linen guise. He has performend Flashback and Soulshaker at closing of We Love...Space and Manumission at Privilage and MTV.

As a DJ, Rob earnt his stripes growing up on the Island and been luck enough to play pretty mcuh every super-club. Headlining the legenday Sunset Terraza Arena for We Love...Space, Manumission at both Privaliga and Amnesia, Clockwork at Es Paradise, Pacha, Mambo, Bora Bora and Eden for Judgement Sundays.

Leigh Devlin came to Phonetic's attention when we heard one of the best chillout mixes we've ever heard. Since that point, Leigh has ben reponsible for mixing all our day albums and in turn, has helped establish the Phonetic Ibiza Night & Day series as one of the best albums around.

Setting things up nicely for those chilled, around the pool, moments is the Day mix. Livening things up with the night album gearing you up for those big nights out.