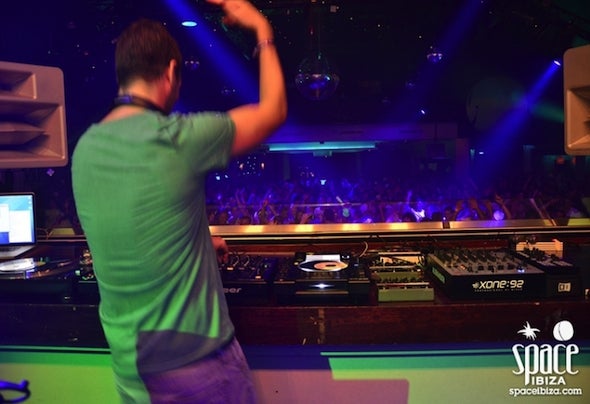 “One of our tips for the top... now mixing it up with the best of ‘em, like the bastard son of Bushwacka and Nic Fanciulii” Mark Broadbent, We Love... Space, Ibiza promoterFresh from completing another summer as resident at We Love... Space, Ibiza, Jem Haynes is an artist completely at the pinnacle of his powers. Playing weekly has enabled Jem to consistently rub shoulders with the great and the good of the global dance music community, contributing to the musical tapestry alongside Slam, Caribou, Joris Voorn, Carl Craig, 2ManyDJs, James Zabiela and many more.This spring he launches his brand new record label Colour Series, where the focus is on the differing shades of music thrown together during Jem’s dancefloor assaults. Based on the rare condition of synaesthesia that Jem experiences (he sees music in colours and shades with every component of the music broken down), each release will be colour coded.Bolder more hedonistic tracks carry a primary colour whereas the deeper tracks will be signified by a gentler palette, an exact representation of his understanding and experiences of music. He’s also lit up other imprints, with 1Trax, Mad Hatter recordings, Vitalik, Loop Recordings and Milkn2Sugars among the imprints that have been blessed by Jem’s beats.His passion first took shape as a precocious teenager, when spurned on from the Warehouse spirit that was taking place in London he started mixing under the pseudonym DJ Search. He released his first collaborative track in 1995 on The Leaf Label, with ‘Pass Agent’ under the Luger pseudonym getting played by the late, great John Peel on Radio 1.Hosting his own show on Groovetech Internet radio for two years and guest appearances on Kiss F.M and Ministry of Sound radio meant he quickly secured gigs in some of the best clubs and festivals in the world. He produced and DJed for two of the genre’s brand leaders in Renegade Hardware and Trouble on Vinyl, becoming a firm favourite with the mainstays of the scene such as Andy C, Grooverider, Goldie and Roni Size.The next stage in his artistic development would come with the Precision Cuts collective. Like a breakbeat X-Men, the group became a formidable live and production outfit and took their sound to Glastonbury, Glade and a flurry of festivals across Europe, China and Australia. All the while Jem was the tour DJ, bringing the same trickery and funk from his drum n bass days to the forefront for his news ound.In 2007 he went solo and began immersing himself in house and techno. It then led to the hook-up with We Love, moving from the smaller rooms to his place as weekly Discoteca resident. Jem defines himself as a DJ first and foremost - and you don’t get many better places to showcase this passion than in the world’s most famous club on the island where everyone goes to party.Gigs at the UK’s finest establishments have included Manchester’s Warehouse Project and Sankeys, Leeds’ BacktoBasics and Ministry of Sound in London, with global turns in China, Croatia, Switzerland, Slovenia, the US and many more. His productions now more than ever reflect his varied personality and dancefloors continue to be dominated by his dynamic displays. Primed to take the step into the next level, Jem has the world at his feet.