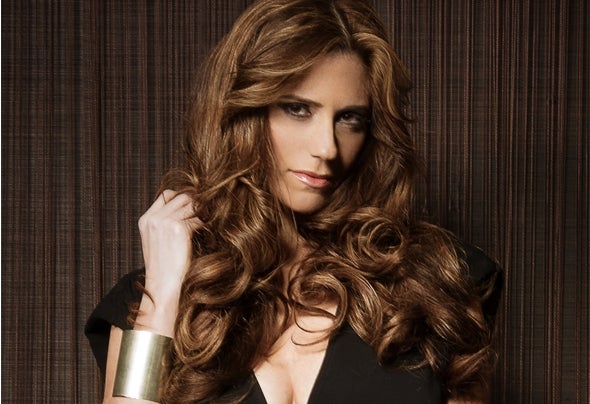 In the male-dominated world of EDM, one artist isdetermined to be seen as more than 'eye candy' or a voice for hire. ARUNA is not solely the pretty vocalist you hear on your favourite tracks - she's penned a chart-topping single recorded by Miley Cyrus for the multi-platinum selling #1 Billboard Hannah Montana soundtrack, collaborated with some of dance music's biggest names and has added DJing to her arsenal of skills.Along with being a classically trained pianist and formerly sought after studio musician, it's safe to say that Aruna is one of the industry's most exciting and successful leading ladies.After her 2007 collaboration on British trance legend The Thrillseekers' hit 'Waiting Here For You,' Aruna's unique vocal chops were immediately in high demand. Suddenly, she was recording for a host of internationally recognized producers, including Cosmic Gate,ATB, Myon & Shane 54, Filo & Peri, Ronski Speed and Roger Shah. Her debut solo single, 'Let Go,' was released on renowned UK imprint Anjunabeats' Volume 8 compilation, cracked the iTunes Dance Top 200 singles chart at #150 and was the second most popular download from the album.But Aruna's true breakout moment would come in May 2012 when her track 'Live Forever' with Dutch superstar Ferry Corsten shot to #2 on the UK Upfront Top 40 Club chart. Dubbed the 'anthem of the summer' by fans around the world, 'Live Forever' became one of the Top 50 most played tracks of 2012 on Sirius XM BPM and stayed at #1 on the Beatport Trance chart for nearly eight consecutive weeks, while the official music video racked up over half a million YouTube views - over 100,000 in the first two days alone.More recently Aruna released her second solo single 'Save The Day' on Black Hole Recordings, a poignant breakup song which tugs at the heartstrings while still delivering all the power and energy of a peak-time club smash. ''Save The Day' was truly a labour of love,' she says. 'I'm really proud how it turned out and the response was great all the way round.'Aruna's honest lyrics connecting repeatedly with fans around the world recently earned her the #5 position in Beatsmedia's Top Vocalists poll for 2012, but a major accomplishment for her that year was making history as the first female solo artist to host the guestmix on Trance Around The World with Above & Beyond on Aug 31st. 'I was so honoured to guestmix for TATW,' she says. 'It's been a huge goal of mine ever since I started DJing and the fact that I was the first female solo artist to do one just makes it that much sweeter!'Within days of the TATW broadcast, her own podcast, The Hot List, rocketed to #14 on the iTunes Top 200 Music Podcasts chart. On the show, she takes listeners on an hour-long journey through her personal favourites in Progressive House and Trance, often showcasing her own mashups and forthcoming releases, with an eye on quality vocal tracks aimed at pleasing a variety of tastes.'Spinning live on the international circuit has been a huge thrill,' says Aruna. 'I've been touring consistently as a DJ now for over a year, including a recent Insomniac event at Exchange LA with Myon & Shane 54 which broke the club's record for attendance!' Not content to be pigeon-holed into one specific genre however,Aruna has been honing her pop music writing skills - on her own tracks and for other recording artists as well. In late 2012, Velvetine, her side project with Myon & Shane 54, released their second single called 'The Great Divide' in September which shot to #1 on Beatport's Trance and Dubstep charts.Currently she's putting the finishing touches on two forthcoming singles, both of which will be released on Enhanced Recordings later this year as she continues to perform around the world. T he future is golden for this Los Angeles-based quadruple threat, as Aruna continues to break barriers through her unparalleled, multi-faceted approach to singing, writing, producing, and DJing.