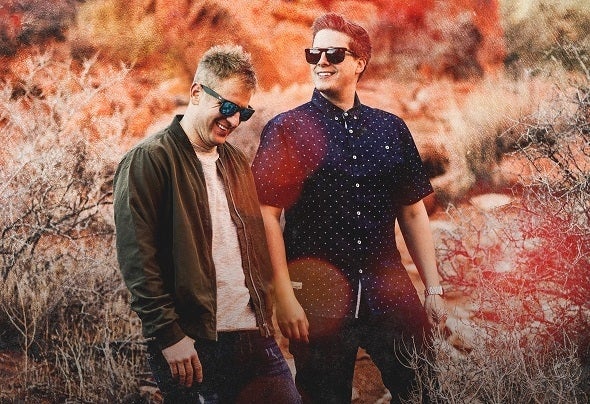 After only three short years of united production, progressive trance duo Tritonal has gone from unknown newcomers to one of the top names in the international electronic dance music scene. Currently standing at #83 on DJ Mag's Top 100 DJs List, Tritonal continues to launch track after track up the Beatport charts and into the sets of some of the most renowned and respected DJs in the world. Their debut artist album, "Piercing the Quiet" produced six top 20 Beatport singles, including two that held the #1 position on the trance chart for almost three weeks —‘Lifted’ and the ‘Still With Me’ Club Mix. Such a rapid ascent into the forefront of an ever- changing dance music scene might intimidate even the most seasoned musicians, but the duo who "complete each other's musical sentences" have captured the hearts and ears of fans and DJs alike. Chad Cisneros and Dave Reed formed this dynamic musical partnership from opposite ends of the United States after meeting online in a sound production forum. Within a year of collaboration, their first smash hit ‘Piercing Quiet’ was voted best track by listeners of Armin van Buuren’s A State of Trance radio show and the pair was on the fast track to becoming one of the U.S.’s—and the world’s—most exciting and innovative acts to watch. In 2011, Tritonal embarked on a nonstop, worldwide tour, performing at the best dance music events in North America, Russia, Asia, the U.K, and Australia. They managed to stand out on the festival circuit, winning over legions of EDM fans at massive gatherings such as Electric Daisy Carnival, Escape From Wonderland, Ultra Music Festival and Nocturnal. Incredibly, they also managed to find time to launch their own record label, Air Up There Recordings, provide a guest mix for Trance Around the World with Above & Beyond, become the resident DJs on Sirius XM's Electric Area, and syndicate their popular Air Up There radio show throughout five continents. 2012 shows no sign of derailing the Tritonal train of success, as the pair have laid out plans for another global trek that will bring them to cities all over the U.S. India, Australia for the legendary Creamfields tour, and ASOT550 in Den Bosch and Miami. With a fan base of dedicated Tritonians expanding rapidly around the world and a truly memorable, vivacious stage presence which must be seen to be believed, Tritonal continues to shower music lovers with their uplifting, original material and electrifying remixes of some of the best dance music today. For more information on Tritonal, visit their:Website: www.tritonalmusic.com Facebook: facebook.com/tritonalmusic Twitter: twitter.com/Tritonal YouTube: youtube.com/tritonalTV