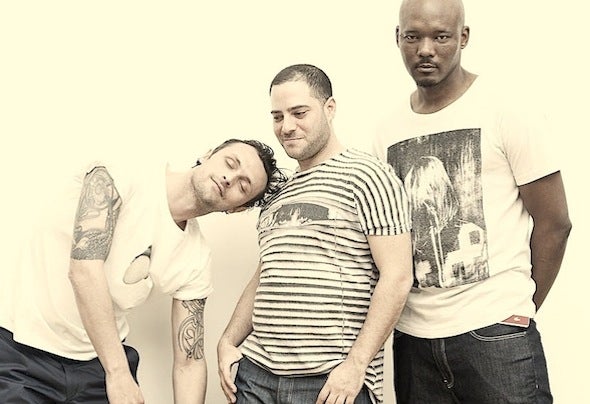 “Only when the comparison stops, can the lightness of being begin” Since 2004 Data MC, comprised of Ono (Singer/Rapper), Walera (Producer/DJ) and San Gabriel (DJ), have been steadily gaining attention in the music scene. In 2006, Data MC were the recipients of the VW Soundfoundation Newcomer Award and were chosen as the supporting act for internationally renowned acts such as The Roots during their three tours in Germany, Talib Kwali, Lyrics Born, Roots Manuva, Dälek, Dizzee Rascal and K-OS. 2007 saw the release of Data MC’s first album, “DATA Invasion”, which garnered a lot of respect from the press. Spex Magazine described them as “Punk without guitars” and it was chosen as the Spex “Album of the Month“. In 2011, the Data MC sound still echoes the heart of Berlin, but the band has expanded musically. Data MC is Data MC, and yet it is different. Their new album “Daily Mirror” is a snapshot of a matured band at the top of their game. They have not been restricted by the hype of the last album as “The Berlin crossover sound of the moment” or spasmodically tried again to make the hippest and coolest album. They remain unconventional while always pushing the limits and breaking free from expectations. “Daily Mirror” is the continued development of content and style from a band that doesn’t just mirror themselves but plays differently on the images of their daily realities in their new songs. Tracks became songs, and they are unquestionably the most personal songs from Data MC to date. Songs with a breadth of identification that can not only reach their listeners in the clubs and on the dance floors, but far beyond. Songs that are not limited to the urban club culture of Berlin even though they arose in that milieu. “‘Daily Mirror’ exists through the lightness of being. It is magical, when you realize and can feel that the journey of finding oneself is complete…when you no longer need to compare yourself with others. We as a band did not have to play-act and just did our thing. Ultimately we knew a song was good when we felt something afterwards rather than just hearing something afterwards.” (Data MC)