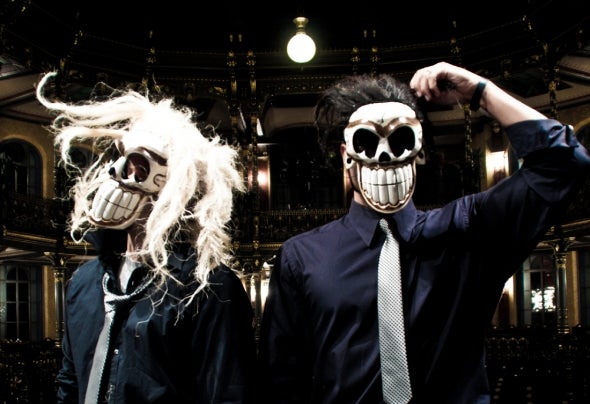 Experience a HANUMAN TRIBE performance from the two brothers with Indonesian roots and you realize so much more lies behind their Asian skull- masks. As they pound the MPC and Synthesizers, producing a massive sound on a high artistic level between Techno and Bass, they party with the audience like there is no tomorrow.Over the top performances by the classically piano trained duo, characterized by their lightening speed on the keys and musical inserts, have impressed at gigs together with Stanton Warriors, A Skillz, Leeroy Thornhill, Atari Teenage Riot, Les Petit Pilous, D.I.M., Beatman & Ludmilla, Hey Today!, the StereoHeroes or Lady Waks.Their love of musical diversity stands out in both their live sets and in their productions, which embrace elements of Jazz, Dub, Balkan Beats or Asian vibes melting them into a unique, unmistakable and in-your-face sound. Even when HANUMAN TRIBE goes arty and deep at some parts, their tracks are always melodious and pounding at the same time. While their productions are regularly found in the Download Charts, they have also been supported by names as the Cyberpunkers, Mustard Pimp, Freddy Fresh, Barry Ashworth, Marten Hørger, Far Too Loud, Reset! or Reid Speed. HANUMAN TRIBE are also highly sought after as Remix artists for acts including X-Ettl, Beatman & Ludmilla, aUtOdiDakT, RuN RioT, B- Phreak or labels as Mahtrasher, Ayra, Freakz Me Out, Tuff Em Up!, Traktor and Diablo Loco Records.RIOT SOUNDS. Label founders of RIOT RIOT RECORDS, a hub of electronic music with three sub-labels, here the brothers’ goal was to create an innovative new channel for progressive Club music. Covering the bandwidth between Breaks and Urban Bass, from Nurave and Hard Electro to Techno and House respectively, their collaborations feature an impressive lineup of artists such as Access Denied, Pop Noname, StereoHeroes, Ben & Lex, The Bulgarian, Jonas Bering, Beatman & Ludmilla, Aerotronic, Daniela La Luz, Sawgood, The Sexinvaders, Kovary, Dubsidia or Captain Funk.IN THE NAME OF THE NIGHT In their hometown of Augsburg, the brothers are arguably the most important entrepreneurs in the club scene. For 10 years they have been managing successful events such as Rude Girls Society, Wie Die Tiere, Matterhørn, Farben! Raven!, and the Riot Riot Technique Nights. Here too, the brothers embrace all the various Genres of electronic music. By bringing international artists on stage, they ensure a vibrant musical discourse that allows for new synergies to flourish. Their Resident Club "Schwarzes Schaf" (Black Sheep) is the perfect sound centre within the local night life.HANUMAN TRIBE ARE CURRENTLY WORKING ON THEIR DEBUT ALBUM, OUT END 2012