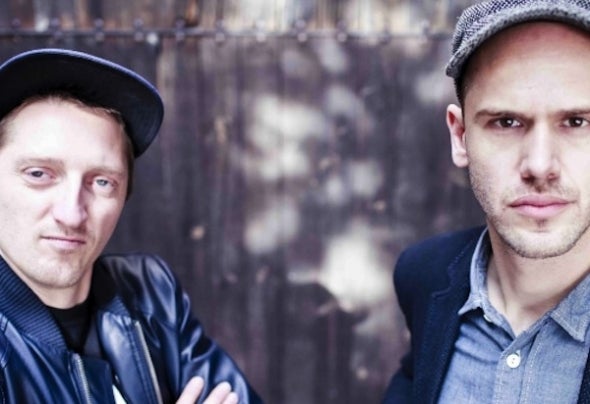 The French band Tambour Battant made of Ben Stoker and Chixx is one of these acts that make all barriers fall. Combining experiments and efficiency on an electro basis, the two producers can't stop searching, looking for any new exciting music to extract the best of it. Hip Hop, Electro, Tropical or Bass Music... An explosive mix that works perfectly on the dancefloor. They have been released on various labels such as Boka rec (Uk), Man Recordings, Freakz me out (De), Straight Up ! (Us), Boxon, Citizen (Fr) and more...In 2010, they launched their own label Château Bruyant (with top producers friends as Niveau Z ero, T he Unik, Pablito Zago...) elected several times best electro finest by the french press (Tsugi, Trax). It enables them to release theirs and others music, following only one motto : let's bang it ! But what make TBBT unique is their off the hook live P's, controllers, MPC pads, electronic drums and effects... Far, so far from your usual arms-crossed-behind-the-decks DJ. T hey have toured Europe, Central America , China, Canada.. for the last couple of years, leaving excited crowds behind. Their hybrid live shows, somewhere between Rock concerts and Club sets, take you on an incredible journey through electronic musics. It’s a handful of mighty hip hop bangers, that slightly moves to dancefloor bombs, and before you even notice it, those fat TR 808 subs are pushing the walls ...Tambour Battant comes back in November, with the "Set it to play" EP featuring Digga Bruckshot released on Profound Audio (NYC), with the remixes of Budju (Fr) and Shackles (Uk). This release, as every time, is supported by a lot of "big shots" like Bass Nectar, Far Too Loud, The Prodigy, Dirtyphonics, Aquasky, Reid Speed, Pyramid, MJ Cole and many more.An official remix of Grems & Forein Beggars is coming. By the way, the two beat makers also produce the last EP of this same Mc and painter Grems, and new TBBT EP is expected on Château Bruyant Records at the beginning of next year.The duet is now cooking some fresh stuff for his new album forthcoming in March 2014.