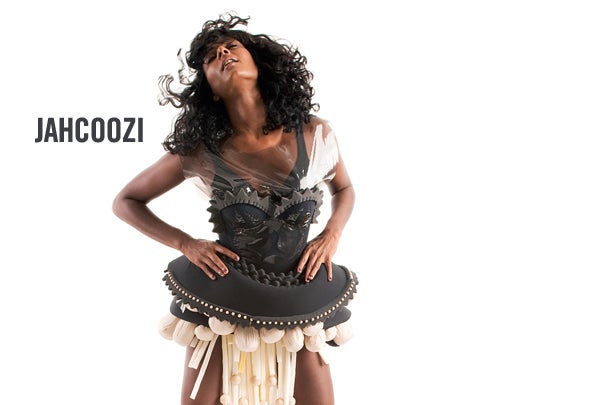 Both musically and culturally speaking, Jahcoozi are a mash up operation who have consistently managed to deliver their very own mongrel style of electronic pop music. Those behind this creative alliance are stage animal /song-writer /MC Sasha Perera (London/Sri Lanka), Beat- freak producer Robot Koch (Germany) and the bass-playing sound-tech fetishist Oren Gerlitz (Tel Aviv, Israel). Having got to know one another during a long, coal-fuelled winter in Berlin back in 2002, Jahcoozi have been making music together ever since. Songs such as Black Barbie and Fish are what gained them early recognition back in 2003, the latter having been played as a CD-R by the legendary John Peel. Jahcoozi's unique and ever-changing blend of avant-dub-glitch-step based sound suceeds in combining honest, communicative pop sensibilities with warm sub- basses and a crunchy, precise yet organic sound texture. With two full-length albums ( 'Pure Breed Mongrel on Kitty-Yo, 2005 and 'Blitz 'n' Ass' on Asound in 2007) and numerous EPs, Picture Discs, remixes and features to their name, Jahcoozi have released music on various international labels such as Kitty-Yo, Asound, Playhouse, Ninja Tune, Bpitch, Citizen Records; Crosstown Rebels, 1965 and WMF Records just to name a few. Over the years, Jahcoozi have collaborated with a refreshingly wide range of artists including Modeselektor, Asian Dub Foundation, Stereotyp, M Sayiid (Anti-Pop Consortium), Buraka Sound Sistema, MC Soom-T, Missill, RQM, Lexie Lee, Ata & Sasse, Cassy, Luomo, Siriusmo, Lethal B, Kano, JME, Skepta, , New Flesh, Infinite Livez, Alhaca Soundsystem, Puppetmastaz, Hannah Holland, Chris De Luca vs. Phon.o, Rustie, DJ Maxximus, Mochipet & King Cannibal. As a result of the interdisciplinary nature of their music and irresistible live show, the band has led a blazing and unrelenting trail across the planet. This intricate journey has seen them play everything from prestigious music festivals (eg. Transmediale, Today's Arts, Lowlands, Electrowave) to raves in Transylvania or even an illegal bring-your-own boombox soundsystem in a Berlin underpass. Jahcoozi have managed to ignite almost any kind of dancefloor, event space or mosh pit-in-waiting; somehow they always seem to morph the situation into a people-power style happening ... Jahcoozi's live show can be quite an unpredictable experience, even for hardcore fans who think they know every tune! With some bands, a live concert means you get to hear all your favourite tracks sounding exactly the same as you've heard them on rotation at home, and by all means some bands and some fans are more than happy like that! But Jahcoozi also tend to play a variety remixes, other versions or bootlegs of their own songs as well as other unreleased material they've made purely for love and fun of ripping up the dancefloor. Having toured 4 continents in 2008, Jahcoozi have been back in the studio putting together their 3rd album, which will be released on the Ellen Allien's label Bpitch Control in May 2010. However, to keep the Jahcoozi junkies going in the meantime, a stunning Picture Disc Vinyl EP (also available on CD) will be released on 23/11/09 on Citizen Records, the label imprint of French electro high priest Vitalic. Remixers include Housemeister, Mumdance, Debruit and Octapush. BPITCH CONTROL ORANIENBURGER STR. 91 /// 10178 BERLIN. GERMANY FON: +49.30. 292 08 01 /// FAX: +49.30. 290 05 772 PROMO@BPITCHCONTROL.DE /// WWW.BPITCHCONTROL.D