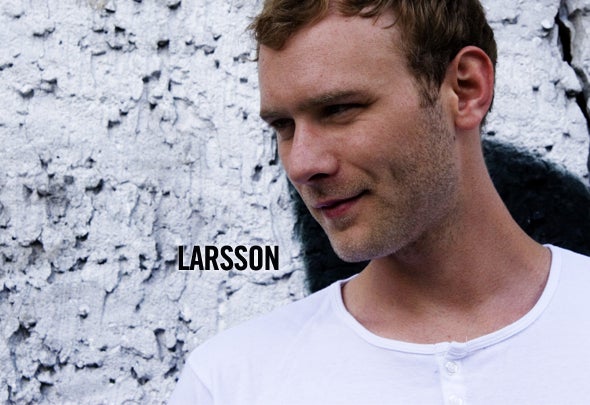 Lars Brämer aka Larsson was born in Bremen, Germany. Since 2005 the techno and house producer lives in Berlin. The musical developements in his productions, livesets and djsets with changing styles and atmospheres stand for Larsson's innovative sound. His DJ and livesets are energetic musical journies, a mixture between minimal house and techno, perfect to rock the floors with quality electronic dance music. Larsson released since 2006 on labels like Bpitch, Traum, Trapez, Get Physical, Hi Freaks, Rotary Cocktail and M-nus. He remixed Extrawelt, SLG and other artists. His best musical experience was to perform at one weekend Watergate and Panoramabar. Larsson played diverse open airs and clubs in germany and europe, like Kazantip, Secret Island, Club Poema, La Ruche, Das Schiff and many more. Besides he played regularly in the afterhour hell Bar25 since 2006. He released as Kramer the "Runner" EP on Get Physical in summer 2007, which was played by Luciano, DJ T and others. In the beginning of 2008, Larsson released on Hi Freaks Lmtd Anima (red vinyl) and Taxi TT (green vinyl) which were played by keyplayers like Loco Dice, Andre Galuzzi, Guido Schneider and many more. In summer 2008 Larsson and Rotary Cocktail Recordings initiated the Rwanda Charity Project, where all incomes from recordsales/events will be donated to the "Deutsches Rotes Kreuz" which supports the camps for Rwanda's refugees. Artists like Reboot, Markus Fix, Marko Fürstenberg, Solar&Poppke, Martin Donath and Ricardo Esposito were inspired by the project and produced outstanding remixes. Supported by Richie Hawtin, Magda, Mark Broom and many more. In October 2008 Larsson released a track on M-nus which Richie Hawtin mixed for the DJ Mag issue november 2008. These days Larsson is planning his own imprint, the record label aphonia which will start in the beginning of 2009.