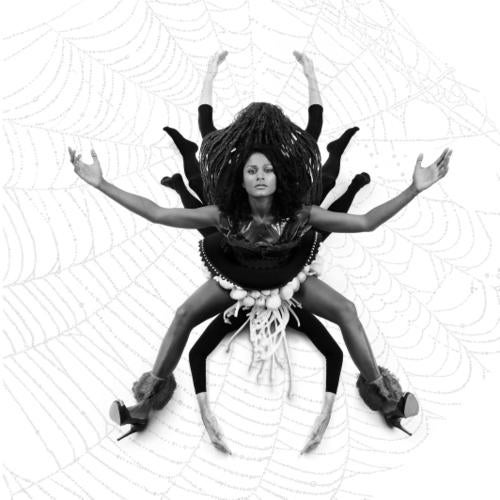 Whats a press release like this one supposed to be about? Its supposed to sum up an artists journey, point out their career landmarks. So in the case of this band, youd have to talk about their formation in Berlin in 2002. Something that wasnt just about forming a band, but also about balancing different cultural backgrounds - the beats being arranged by Robot Koch in Berlin, the vocals coming from formerly London-based Sasha Perera and the basslines being laid down by Oren Gerlitz, who lived in Tel Aviv. Youd also have to talk about the early support from John Peel, and their album releases Pure Breed Mongrel (2005) and Blitz n Ass (2007). Plus their countless 12 releases on labels such as Citizen Recordings, Crosstown Rebels or Playhouse. Not
to forget their buzzing and unpredictable live shows which brought them to four continents in 2008 and covered everything from renowned festivals like Transmediale to raves in Transylvania. Then youd have to talk about the numerous collaborations with folks like Modeselektor, Asian
Dub Foundation, Anti Pop Consortium, Buraka Som Sistema and many more. And youd definitely have to talk about them being at the forefront of producing eclectic sounds and merging genres like grime, punk rock, hip-hop and various blends of electronica to create a unique definition of pop music. A pioneering role they embraced with the same spirit that brought like-minded projects like Diplo or Switch productions, figures like M.I.A. or Terry Lynn or subgenres like baile funk, 2 step or booty bass into the public eye.

All of this had to be featured here, and well, it is now. But! A band that records an album like Barefoot Wanderer could hardly be interested in a text full of self references. It might even be quite useful to simply forget most things known about Jahcoozi. Barefoot Wanderer most
definitely marks a caesura. As the title already suggests, its the implementation of a new-found purism. Its not a loud, bright, stage-ready record. Recording something like that wouldve been far too easy. Of course they continue to be restless, they still filter their distinct dynamic from
their different tastes in music and they are still crossing borders. With the support of the Goethe Institute they went to Kenya to record the track Msoto Millions along with MCs from Ukoo Flani, a Kenyan dancehall/reggae crew in Nairobi. Staying true to their core musical approach, they gathered friends from all around the globe, but this time took it further than ever. For example,
theres a track with percussionist Guillermo Brown from New York, they feature Belgian singer Barbara Panther on another, and (drum roll!) clay pot percussionist Oori Shalev from Israel, who of course played his part in making this track a quite unconventional affair. In general, they bring home sound souvenirs from every one of their journeys, but they wonít tour the world with Hypebeast-approved trainers on their feet - they wander barefoot. Not only does Barefoot happen to be the most fitting metaphor for this album, it is also a kind of branding for the mentality that Jahcoozi and their brothers in spirit, Stereotyp & Alhaca from Vienna, have come up with. A mentality that appeals to everyone who feels comfortable in the most varied worlds of bpm counts and bass variations. Itís something like an attempt to find a genre name for the act of refusing genres.

Its not that this new album revisits all of the bands typical reference points. Rather it examines all their unexplored niches in an incomparably subtle way. Chances are the band has never stretched itself so far, and it has ended up forming a unique microcosm with its own rules and
language. Barefoot Wanderer is without a doubt the most self-contained and cohesive work they have done so far. Its sex appeal not only speaks through Sashas booty-shake, it virtually shines through a mysteriously hazy twilight. Unlike anything else, this album refines dubstep,
it recalls the early dancehall spirit, it even reawakens the expressive force and agitation of digital hardcore, though without letting the formal execution become too explicit. In fact, its quite the opposite. Its a documentation of subtlety. Yet in every proclamation - some of which even reach into ambient aesthetics - pulsates the most lucid form of expression and the niftiest approach to pop the band has undertaken so far. And even the most explicit moments such as Power Down Blackout, fuelled by long-time partner in crime M. Sayyid of Anti Pop Consortium, are laid down with a nonchalance that will get a crowd going in the blink of an eye.

On the whole, Barefoot Wanderer is the album nobody expected, but perhaps that is the only possible outcome for a band that holds unpredictability as its one constant principle.