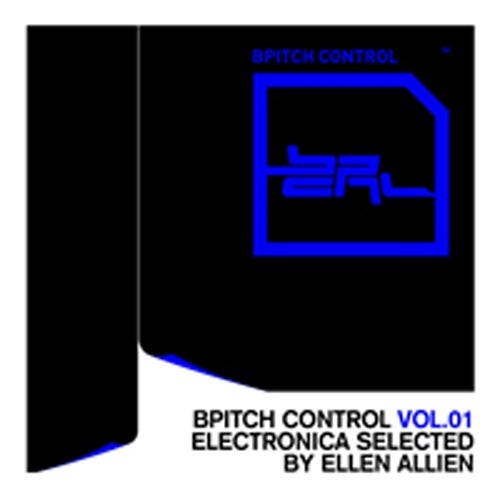 A retrospective sometimes turns out to be very diverse, especially when it comes to a label such as BPitch Control. The basis of BPitch Control´s label philosophy is - and has always been - cultural and musical diversity. A first foretaste to BPitch Control´s 10 years anniversary is presented with this new, digital only, compilation series. Preluding this series is “BPitch Control Vol. 1 - Electronica selected by Ellen Allien”. The label boss itself, Ellen Allien, has chosen her favourite Electronica tracks off of BPitch Control´s back catalogue. So you´ll find a collection of tracks that are more smart and modest through its subtile and reserving character, but would top any hit record with its music-cultural relevance - tunes such as TimTim´s “Atwater.CA“, “2 Kind 4 U“ by Feadz, Ellen Allien´s “Licht“ or Modeseletor´s “Fake Emotion“, remixed by Dabrye. Completing this collection are two exclusive, previousely unreleased tracks that give a first outlook to the new year: Telefon Tel Aviv, whom will release their album “immolate Yourself” on BPitch Control in January 2009, have contributed the track “Helen of Troy”. The second unreleased track is “In Cycles” by AGF / Delay. Their album will be released in late February 2009. The ”BPitch Control - Digital Compilation Series“ is simply that much fun because it tells the story of Bpitch Control´s musical history perfectly, as nobody else could do with only words. So let the music speak for itself.