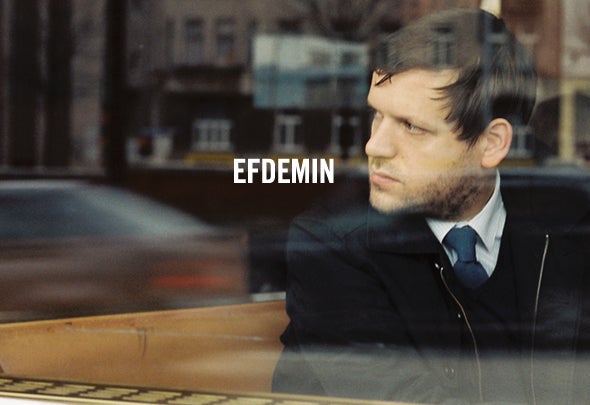 2007 has been a highly productive year for Phillip Sollmann a.k.a EFDEMIN and he for sure is one reason that DIAL records arrested massive attention. After releasing his first (selftitled) full-length album on Dial Records in may 2007 and putting out a buch of remixes for Dessous, Bpitch, Morris Audio, Aus! Or Brut!, Efdemin was constantly behind the decks somewhere presenting his idea of the music with his ability to blend between house, minimal and techno. Where Efdemin's earlier production work was rather focused on slow, abstract house in the vein of Theo Parrish, he has slowly turned to a more functional approach without losing his special sense for deepness. Efdemin's sound design has become a lot more unobscured and differentiated. And he knows how to adjust old school influences to contemporary listening habits. His unique DJ-Style with its eclectic mix of strict but deeply detailed tracks provide a continual sense of excitement and create a kind of graze over the night. His album was voted album of the year in Germanys Groove Magazine Resident Advisor Poll 2007 Top tracks of 2007 No.10 - Pigon - Promises No.14 - EFDEMIN - Just a Track Top albums of 2007 No. 2 EFDEMIN - Untitled Top labels of 2007 No. 1 Dial Top producers of 2007 No.1 EFDEMIN Top DJs of 2007 No.6 EFDEMIN Slices DVD-Magazine contains a feature on Efdemin (Issue 4 – 07)