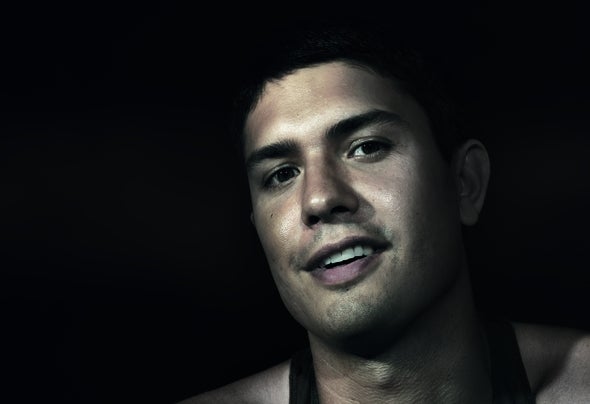 Currently one of the brightest stars in the Minus firmament, Heartthrob aka Jesse Siminski has arrived on the scene with a fresh new take on the minimal sound. It's not just his ear for a killer riff that makes him such an exciting prospect it's also his natural ability to convey a sense of drama and humour through his music. There's an infectious energy in his sound that rubs off on his audiences but it can also be heard in his musical collaborations. Heartthrob brings something new to the table - be it quirky melodic hooks or twisted vocals - that manages to inspire those around him to even greater heights. Growing up in the remote and rural town of Marquette, Michigan, situated about 6 hours North of Detroit, music was a vital part of his upbringing. Dad played guitar in a number of bands that regularly practiced at their house and this healthy diet of rock, funk and reggae together with his older sister's obsession with Prince, shaped his appreciation of dance music from an early age. Erotic City, Laid Back's 'White Horse' and Kraftwerk's 'Tour de France' are still huge influences from that time. Jesse discovered techno music around 1996 through a magazine called 'Massive' that covered the new rave culture exploding in the Midwest. Plastikman's 'Gak' was one track in particular that opened his eyes and motivated him to visit his first Rave. Needless to say, he was totally hooked! He immediately bought turntables and started looking for synthesizers to make music, starting out with some retro 70's gear handed down from his father. Next to studying art and painting, music rapidly became his true passion although it was never something he seriously considered as a career option. All that was to change when he hooked up with Magda in New York in 1999 and was immediately taken by her warm nature and fantastic musical sense. She and Troy Pierce had started working on music and introduced him to Ableton Live. Shortly after, Richie Hawtin moved into the same building as them, it was a very natural situation during which this dedicated band of producers and djs began laying foundations for the future. Since then the learning curve has been steep. Jesse swapped New York for Paris in 2005 to focus his full attention on production and performance and by his own admission it's been an incredible experience. Being invited to use Richie Hawtin's studio and remixing Depeche Mode's 'Personal Jesus' are two major moments that particularly stand out for him since arriving in Europe however 'Baby Kate', the memorable opening to 2006's min2MAX compilation is the track that has come to define his sound. Heartthrob describes his approach to music as "a messy 'stream of consciousness' daydream". The challenge for him is to make something unique and personal that speaks for itself, regardless of whether it stays true to form or not. The traditional functionality of Techno music must always be present but for Jesse it's all about taking risks and trusting his instincts, which is why his own particular style is so varied, covering a whole lot more than just glitches, bleeps and sound effects. Melody plays a significant roll in his work, often providing the focal point around which the rest of the track orbits. There is also an inherent darkness to his music but just as it's always darkest before the dawn, there's often an uplifting, cathartic side to it that celebrates the unified spirit and generates such a positive vibe on the dancefloor. Music also allows him to document his experiences and with the cast of characters that surround him, inspiration is never far away. With tongue firmly fixed in cheek, he often creates fantasy personas that get documented through vocals or song titles, like a secret tribute and with such an impressive collection of releases and remixes already to his name (both as Heartthrob and alter ego Vivienne Projects), it can only be a matter of time before the tributes start flowing back the other way.