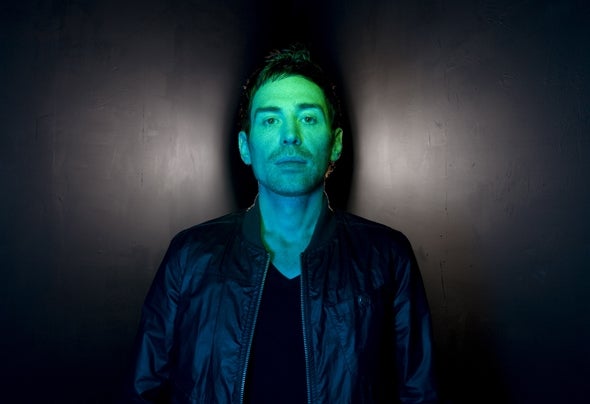 Photek stands mercilessly on the edge. A sonic scientist, pushing both his sounds and fans' expectations to the outermost limits since 1994, he floods the footnotes of electronica like MP3s clutter up your hard drive. He was there when Goldie declared it drum & bass but to this day he still prefers the term jungle. He chats regularly with James Lavelle, wondering what would've become if his remixes of Attica Blues had led to a more affirmed relationship with the agenda setting Mo Wax. His major label link with Virgin is the blueprint of how things once were; endless time and budget-free worries led to 'Modus Operandi'. A conceptual experiment of time and emotive atmospherics, it pushed the drum & bass template to the edge. Previously misinterpreted as a lone paranoid soldier, a conspiracy theorist and a man from Ipswich, Rupert Photek Parkes is none of the above. Each tale you'll be regaled with elsewhere online is based on a spec of truth that's exploded beyond proportion. May the real Photek please stand up...2011 will see him drop a series of sounds that reflect the truest perception of him once and for all. Driven by his years of studio discipline; sharpened by an acute awareness that he'll be received by the heads that know him well and ears that don't know him at all, Photek's new sound carries all the barbed motifs and icy atmospherics you'll know from seminal cuts such as 'Seven Samurai' and 'Hidden Camera' all tied up tight with his own take on today's contemporary genre-breaking melting pot. Ardent displays of his eclectic method were there from the very beginning. The seeds had been sewn back in the dancefloor's most formative days, attending early raves, pretty much in his school uniform, and hearing DJs like Jumping Jack Frost fire their way through everything from Derrick May to Phil Collins. These influences are clear from his first EP on Metalheadz with the drum & bass meets downtempo 'Into The 90s'... 'Yendi', the flipside to the 'Modus Operandi' 12", was a prototype for dubstep while 'Mine To Give', a sassy slab of sexed up house coated in Robert Owens' iconic soul, set the foundations for the genreless battlefields well trodden by the likes of Commix and Mount Kimbie. A list of his big screen scores should follow, but it won't. Photek carelessly yarns his years in LA as 'doing this and that', but it wasn't. Hived in the western world's most creative hub, his time since 2007's 'Form & Function Volume 2' has been a creative whirlwind. Collaborations with Nine Inch Nails and troubled troubadour Ray LaMontagne; sell out TekDUZ shows with 12th Planet and DJ Craze; the evening commute down Sunset Boulevard with Fab & Groove on Sirius reminding him of the UK bass culture he helped develop... Photek stands undeniably on the edge of undiluted inspiration.Destination tomorrow: Photek's decorated past and diligent work ethic leads us here. The new music you'll hear this year is yet another chapter in a life spent overdosing on sonic nuances and boundary testing. An exultant voyage in a life that's shaped the very foundations of the sounds we love, these are sounds that he's teased at since the techno tickles of his 2000 album 'Solaris' Take his collaboration with Switch, 'Avalanche'; a low-swung modulator, its half-step march belies the crafty subversion of a well known rave sample. Take '101'; its icy peripheries suggest a Photek we've known since time while kidnapping the principals of classic electro and booting them effortlessly into the 23rd century. Take 'This City'; a lolloping load of filters and reverse athletics, its somnambulant sounds make it a literal house dream. 2011 has already seen Photek's new material remixed by the brightest young stars of dance music - Boddika, Falty DL, Addison Groove and Breach to name a few. With international support from tastemakers such as Benji B, Gilles Peterson, Skream, Annie Mac, Zane Lowe and more for February's 'Avalanche EP', you can be sure that whatever sound Photek next it won't fail to get the world's attention. http://www.photek.fm/http://www.facebook.com/photekmusichttp://twitter.com/photek