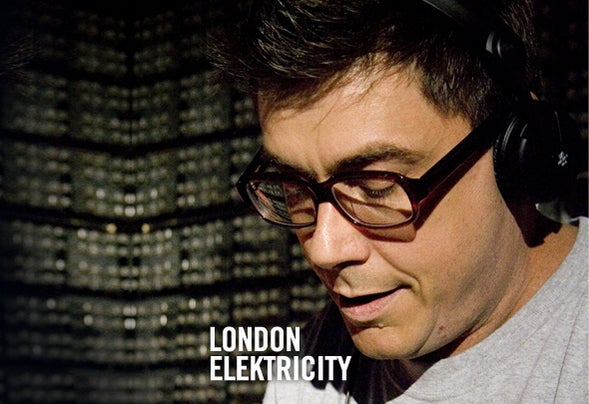 London Elektricity has become a byword for groundbreaking 'fast soul music', ramming venues, destroying drum & bass crowds, leaving huge smiles from the Big Chill to Glastonbury and beyond, LONDON ELEKTRICITY LIVE has always been 'out of this world'. Flip the script again in 2007. Tony LE is back behind the decks with sets from London to Japan to Malaysia, Australia, California, Eastern Europe an onwards. Tony also keeps it cutting edge as always by bringing you the groundbreaking Hospital Podcast. This regular show, available through iTunes, is smashing up the bandwith as people subscribe from Canada to Cape Town. Keep locked on as London Elektricity pushes things forward! The LE saga began way back in '96, and up until 2002 LE was a double-act. Tony Colman and Chris Goss made their mark in 98 with the epic Song In The Key Of Knife, and subsequent critically acclaimed debut album Pull The Plug. In 2002 Tony took on the project solo, as Chris concentrated on taking the NHS empire to the next level. With the release of Billion $ Gravy in 2003, phone calls from Fabio and Radio One requested a live session from Maida Vale - and lo', LONDON ELEKTRICITY LIVE was born. For 2 years between 'Gravy' and 2005's album Power Ballads Tony and the Band have played over 150 gigs reaching a quarter of a million people with their Live Drum & Bass spectacular! With the release of Live at The Scala The band has come to a close for the time being, with hospital bringing through the new talent in 2006, expect LE to re-emerge soon with some dancefloor corkers and more fast soul classics!