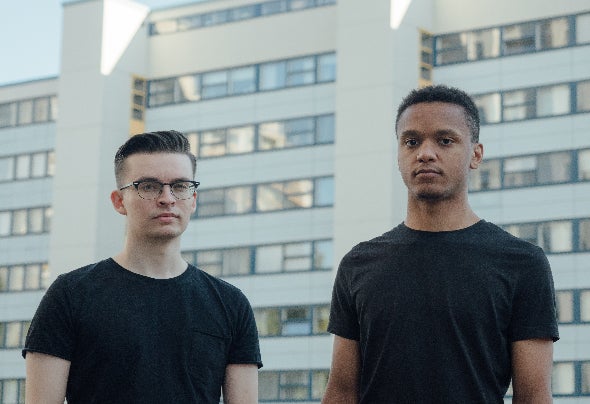 Hailing from dark & snowy Finland, Juho Kavasto (Askel) and Sainey Gibba (Elere) have individually, and collectively, been providing the liquid side of the drum & bass scene with some seriously sublime sonics since 2018. Finding inspiration in the challenging landscape of their homeland, they conjure up melancholic melodies and curious compositions which have their own unique flavour. Quickly grabbing the attention of Soulvent Records, this prolific pairing have been blessing our eardrums with a run of releases on a variety of labels, including Fokuz, Delta9 and Hospital Records. Both standalone musicians in their own right, this young matchup meld rich and diverse elements from a broad spectrum of genres. They draw from an arsenal of techniques to deliver their futuristic compositions too - Sainey’s vocal prowess and bass playing roots give him a great understanding of low-end, while Juho has a deft and detailed demeanour in his approach to all things percussive as a drummer. With tastes ranging from West African folk to political hardcore punk, calming neo-soul to videogame soundtracks spanning the last 15 years, the result of their efforts always produces fresh sounding music which rarely rests on its laurels. The pair have already achieved a number of childhood aspirations, including providing DJ support for loungecore D&B pioneer London Elektricity in Helsinki, releasing vinyl on Med School Music and receiving healthy airtime on a wealth of radio stations including BBC Radio 1, Rinse FM, Vision Radio and Finnish national station YleX. But this fact in no way, shape or form means they’re getting complacent; their continued drive and passion for the music shows no signs of slowing down, with them receiving regular DJ support from the likes of DJ Marky, René LaVice and Random Movement. While 2021 promises so much for the world, these two bright young talents will ensure that whatever takes place will have a burgeoning soundtrack to pair whatever the weather. Pull on your mittens and prepare for some serious skanking - Scandinavian style.