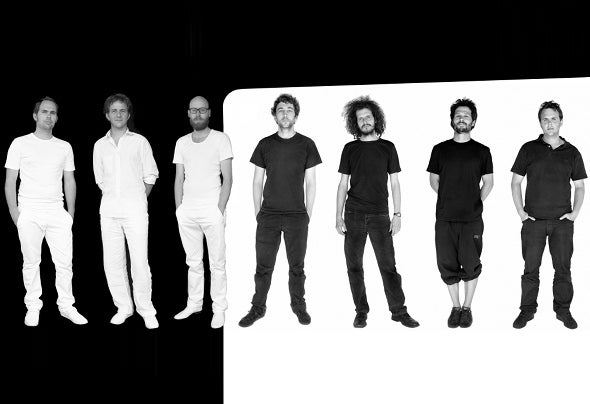 Rambazamba through the inexhaustible nature of rhythm! It´s Human Jazzhop Palim – organic live pogo with modern technical hip-hop and house roots! “Life is a Construction-Site” is the name of a stunning German movie. The life of “Feindrehstar”, a band of eight from Jena/Thuringia, runs on stage – and were it to be screened “The stage is their construction-site” could be its title. After all, once the eight gentlemen take the podium, the audience is about to be taken away on an acoustic journey – just like a good movie takes its audience to places they have never been before. Yet, no one is expected to sit around and wait for the story to end – the performance is set to move. This acoustic movie is infectious – rattling and dazzling, smoothing and soothing its audience on its feet, calling for laughs and tears – whatever one’s disposition might be. However, one thing is for sure, no one is going to leave the place without a sweat-soaked shirt and a big fat smiling face – provided that he or she has dismissed those quick-at-hand genre-drawers that cut to size whatever they can´t fit. Feindrehstar stand for live club music. Playing themselves into what might be called an acoustic trance, they distill the essences of Hip-Hop-Jazz-House-Funk-Worldmusic, in order to stir and indeed satisfy their audience’s innermost cravings. Inside the German music-scene, Feindrehstar have created their own genre: “Krautclub”! By now, the band´s Live-feel is a session-vehicle, that has turned such unlike siblings as NuJazz/Broken Beat, Techno and House into a sizzling new musical brand. “It´s alright as long as it works!” seems to be the musical credo! This is Madness live and in color, modern musical self-consciousness on display! So far Feindrehstar has played countless gigs on German and European stages and has single-handedly released two 7” Singles and two 7 track CDs on their home label “Human Instinct”. Due to the vigilance of Jazzanova´s sonarkollektiv open-heads, Feindrehstar released in August 2006 her first EP “Danctrack” on Sonar Kollektiv. In 2008 Feindrehstar became the award recipient of creole – world music from middle Germany - so, please welcome to the stage – tune up your ears – get ready for rambazamba – there they go!!!