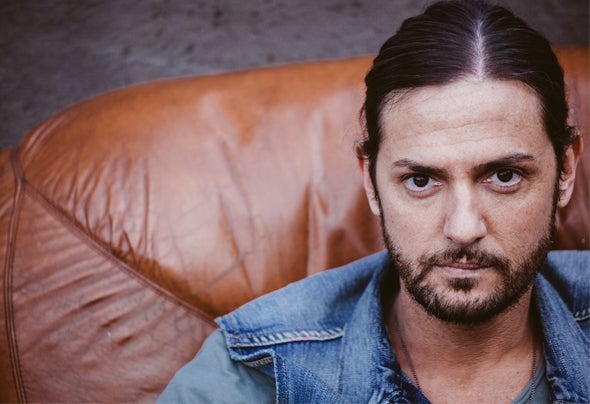 Massimiliano Pasini, aka Mappa started his musical career as a pianist in 1992. After several years of classical music study at the “Rossini” conservatory of Pesaro he changed his initial musical projects and started a collaboration on musical productions with some artists like MAS collective, Richy Montanari, Mauro Pilato and Max Monti. By that time he began taking a liking to the world of Disco music and Dj music and above all to the recording and production techniques. At the same time he was involved in a Pop project with his group called 78bit and the outcome of this labour arrived in 2002 with its partecipation to the prestigious San Remo music festival with the song Fotografia and with the signature of a 3 album contract with the recording house BMG – Sony. In 2005, after the 78bit experience, a new Electro- House project called Margot started. In collaboration with Giaga he produced Every Monday (Re-Vox Records) and Torch (Great Stuff Records) and both of them met a good success in various Italian and international clubs. Mappa improved more and more the recording and mixing studio techniques and at the end of 2006 he decided to concentrate and to specialize full time on the arrangements and on the sound. In 2008, after having worked for various clubs on the Riviera Romagnola, he returned to the Peter Pan where he started his career in 2001 and there he met Holly with whom a thriving collaboration started. In 2009 the Just Addiction House Project with the featuring of Michela Bugli started and their first single There’s Nothing come out. After various remixes made together with Holly for the D- Vision, Holly & Mappa – Every Monday came out and this has been the bit hit of Winter 2010 which was played in the best Italian clubs together with other singles and rmx produced by various artists. Since 2012 he started a collaboration with Andrea Arcangeli with whom he made various productions for Less Conv Records. Additional projects were made together with ASAL, aka Salvatore Angelucci with the pseudonym A.M.A. for other labels. In september 2012 Mappa and Andrea Arcangeli got a contract with a wellknown Swii label PURPLE MUSIC the label of Jamie Lewis, with artists like Prince, Alfred Azzetto, Anthony Romeno, Dario D’Attis and many others. They produced the single A+M Feat Kelly Joyce – The World Changes thanks to which they entered the Top 100 of TRAXSOURCE. Currently he is collaborating with Federico Scavo (a wellknown Italian producer who won recently the golden record by the Strump Single) with whom he produced the Single A Deeper Love which entered immediately the ranking of the top 100 of BEATPORT. Furthermore he had the honour to share the consolle and to open the performances of international Dj like David Morales, Little Loui Vega, Martin Solveig, Dadiv Guetta, Axwell, Sebastian Ingrosso, Angello, Fedde Le Grand, Mark Knight, Alesso and many others. During the Summer 2013 he was resident together with Albertino for the Diabolika Party at COCORICO (Riccione) and resident at PINETA by VISSIONNAIRE (Milano Marittima). At present he is resident at PETER PAN (Riccione), VILLA DELLE ROSE (Misano A.), TREMENDA (Modena) and SETTEPUNTODUE (Padova).