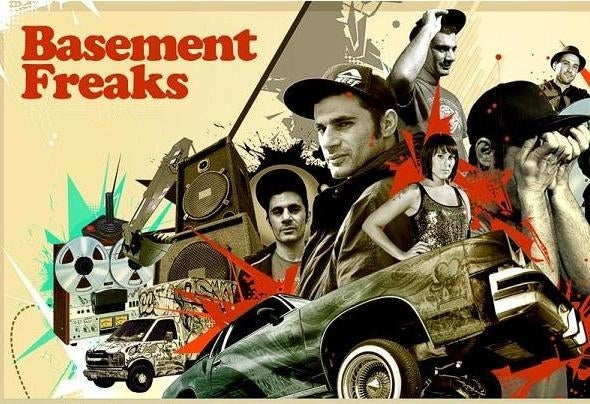 If you've been paying any attention to the world of funky breakbeats then you've no doubt heard of Basement Freaks - the brainchild of George Fotiadis, a major force in the scene for well over ten years. Not only do his DJ sets elevate sold out crowds, he produces more music than almost any other DJ in the scene and is the label boss for the infamous label Bombastic Jam. After more than 10 successful vinyl releases, 2 full albums, over 15 remixes and countless digital EPs, George has been called "The hardest working man in Funk". His music has been praised by MixMag, I-DJ Mag and even the Godfather of Nu-Skool Breaks - Rennie Pilgrem. In fact, every respectable funk DJ on the planet includes a Basement Freaks tune in their set. George exploded into the world of breaks with his remix of Beggarman by Smoove and Turrell. Jalapeno records got wind of this and sought out George to produce a follow-up album - "Something Freaky" - which has been played on BBC's Radio1 and written about in Knowledge Magazine. His previous album - "Debut" - was part of his side project, Smokey Bandits, and showcases George's multitalented skills as he plays guitar, bass and drums. Since then, George has released music for Goodgroove,Wack,Breakbeat Paradise, ESL, Air Recordings, Bombstrikes and, of course, Bombastic Jam. Basement Freaks has toured extensively throughout Europe - dropping funk at the renowned Glastonbury Festival, the Fabric Nightclub in London and the Exit & Reworks Festivals. In the summer of 2011, Basement Freaks headlined the world's largest and best breakbeat festival - Shambhala - in Canada. Ten thousand screaming fans went ballistic as they experienced a night of incredible funk from one of the world's best - The Basement Freaks.