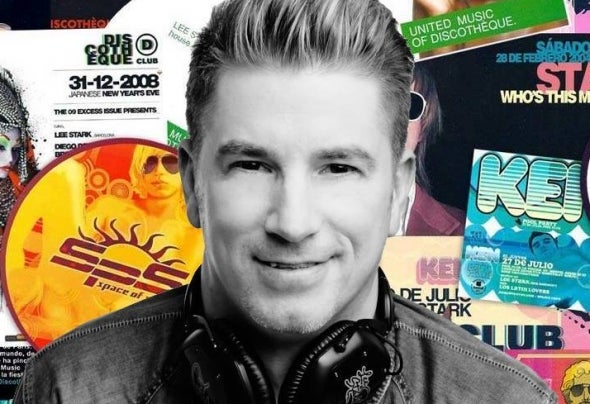 Who is Lee Stark?Well, he is a young, handsome, blond guy, shrouded in mystery. His age and nationality are unknown, though it is said that he is Czech, of Polish origin. It is rumoured that before being one of Spain’s most sought after DJ’s, he worked as an extra in Steven Spielberg’s movies, as croupier in Las Vegas, and even as a gigolo for California’s high-society.They say he started playing in Naples for the mafia in secret play sessions, and then was discovered by a music business talent scout when he played records in Pink Flamingos, a striptease cabaret in Marbella, frequented by Arabian sheiks.After travelling around the most important clubs of Spain and Ibiza, he established his residency in the famous nightclub Torres de Ávila, designed by Javier Mariscal for the Olympic Games in Barcelona 1992. There, he remixed his first compilation album, Torres de Ávila, which made it into the top ten sales of house music compilations. Soon after, he got very famous and well known by the audience for his radio programme in Flaix FM, the most important dance music radio station in Spain.His concept of dance music, based on highly danceable rhythms, melodic and vocal house, has led him to be praised in the best gay clubs, reaching residency in Salvation, Barcelona, and making the soundtrack for Gay Pride Barcelona 2002 and 2003. And from there, to his present residency at the super club Discothèque, in the same city, the club that has been visited by all the international music business stars, from Danny Tenaglia to Paul Oakenfold.Next June will see him on the cover of Deejay magazine, the most influential dance music publication in Spain, and on 3rd of July he will be playing at the All Stars Dj’s Festival, second edition (attended by 12.000 people last year), sharing bill with topDJ’s like John Digweed, Carl Cox, Roger Sánchez and Erick Morillo.