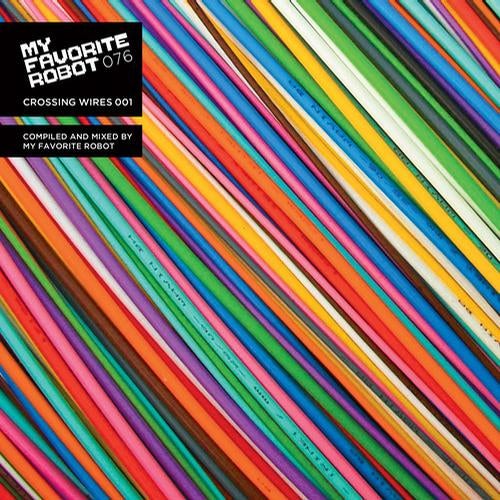 Jared Simms, James Teej & Voytek Korab AKA My Favorite Robot have quietly been positioning themselves as one of Canada's hottest exports in recent years. Releases on label such as Visionquest, Crosstown Rebels and Sasha's Last Night on Earth, as well their own eponymously titled imprint, have seen the Robots become central figures in dance music's ever shifting landscape, whilst their label showcases and guest slots at the likes of BPM, DC10 and Miami's WMC have left no doubt as to the trio's talents. With this level of success comes a network of friendships and working relationships and it is to these that My Favorite Robot have turned for the compiling of their debut mix album. Not content with a mix of licensed tracks featuring one or two exclusives, the Toronto three-piece have reached out to their industry friends and have put together a stunning album of entirely exclusive tracks. 'Crossing Wires 001' takes both its title and its inspiration from the broad range of musical styles and sounds that make up its 15 separate parts. The My Favorite Robot ethos has always been firmly rooted in an eclectic approach to music with the label and act bringing through elements of electro, techno, house, nu-disco and electronica. For 'Crossing Wires' Simms, Teej and Korab have brought on board a truly diverse selection of artists ranging from techno stalwart Alan Fitzpatrick through to disco aficionados The Revenge and encompassing everything from the mid tempo electro-disco of Jori Hulkkonen to the pulsating techy excellence of Eric Volta. There are obviously highlights in the three tracks which featured on the recent sampler, The Revenge's 'Maia', Timo Maas' 'Dancing for my Pleasure' and James Teej's 'I Like to Clip' but the quality on this mix in no way stops there as the Robots offer up gem after gem of brand new exclusive material. The chugging brilliance of Stefan Z's 'Love Tonight', the subtly uplifting 'They Wos' by Inxec & Droog and the intense and hypnotic Nitin & Clayton Steele remix of Fairmont's 'Libertine' all offer wonderfully different elements in a mix that genuinely sees the electronic threads of MFR's vision woven into a unique audio tapestry. 'Crossing Wires 001' is a truly original and inspiring electronic selection that is a testament to its many contributors and its three-headed selector and should keep music lovers happy for the summer months to come. As if that wasn't enough there is a My Favorite Robot artist album in the pipeline for release on Jonny White's No.19 Music label in the autumn leaving us with plenty to look forward to from Toronto's finest.

Crossing Wires 001 - Compiled and Mixed by My Favorite Robot