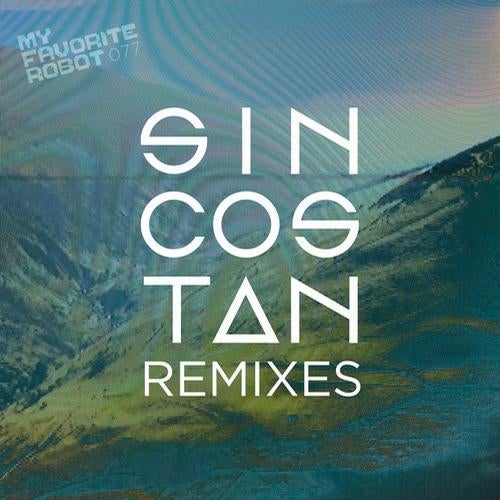 Juho Paalosmaa and Jori Hulkkonen are Sin Cos Tan, "a synthesized duo of great promise, broken dreams, and long nights" who released their critically acclaimed self-titled debut album in November 2012 to a great reception. During the summer the band will be finishing their follow-up album planned for release later in 2013, but in the meantime My Favorite Robot enlist some big time remixers to tackle the duo's back catalogue, with Mark E and Kris Wadsworth those given the nod. 'Not Over' is the first track to get a treatment from slo-disco specialist and Ghostly associate Mark E (it also comes in a dub version). He breaks the track down to crunchy claps and a slowly stepping, thick synth bass line that percolates up through the track over and over. The airy vocals remain intact from the original as nebulous melody lines and sultry saxophones float around in cosmic harmony. It's then the turn of Berlin based Atlanta born bad boy Kris Wadsworth to re-interpret 'History', and he does so with his usual panache. The lines are all skewed, the textures raw and unpolished and the mood edgy as crackles of hiss and static pollute the airwaves whilst heavy, lumped drums kick below. Things grow increasingly lively with the dancing synthesized melodies that appear part way in to the track and also release some tension. The vocal takes on a more haunted characteristic in Wadsworth's hands Finally, we're also treated to an Extended Dance mix of the militant tech house stomper that is 'Trust' with its loose percussion, taught bassline grumbles and celestial, skyward melodies. The breakdown is shrouded in echo and as a result the vocal drifts on air before the track kicks again in a macho nu disco style akin to the sort of thing Andrew Weatherall might employ. Some fine A&R here has breathed plenty of new life into some already classic tracks by Sin Cos Tan.