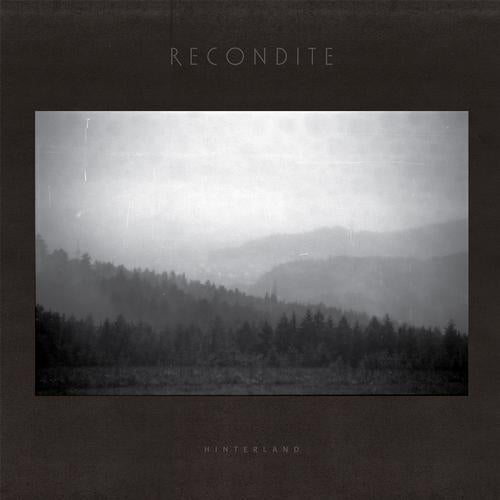 For many great artists, going back is the way to move forward. With this in mind, Berlin-based producer Recondite looked to his homeland of Lower Bavaria for his debut Ghostly International release, Hinterland. I tried to capture the areas mentality and natural environment within the album, he explains. Particularly the moods that behold the emotions of the four seasons, which differ a lot in this region. In fact, most of the field recordings featured in this 10-track LP were taken in his recent visits to the free state in southeastern Germany. Recondites production career has only spanned a handful of years, but his versatility with electronic music as an expressive medium puts him beyond others with discographies twice as long. He began Plangent Records in 2011 as a means for releasing his own music in limited batches. Lush, gorgeous, and vibrant are three words that can often describe his original productions, whether its floating in a beatless ambience or driving a hard rhythm through the soundsystem of a nightclub or warehouse. His debut album came out in 2012 on the Los Angeles-based Acid Test imprint, and quickly put him up alongside labelmate Tin Man, who offered a remix for the On Acid LP. And Cleric, a standout track from this years EC10 EP on Dystopian, has been played around major venues and festivals over the last few months by everyone from Dixon to Marcel Dettman. Hinterland is another step forward in Recondites progression, maintaining a style all his own and acknowledging the finest moments in his previous releases. Its no small feat to incorporate ones observations of human nature against nature, and to lay it out in such a way that is cohesive, linear and sonically beautiful both up close and from a distance. Characteristics of peoples minds, he says. Such as satisfied, frightened, calm, melancholic, sad, stoic, frustrated, strong, deepthey are captured in the sounds. While the record can be enjoyed in one long listen, there are going to be different tracks that speak to individual listeners. Clouded is one of the stronger arrangements, taking crisp white noise sweeps and filling the surrounding space with dreamy samples and warm bass. Stems is playful and fluid, and the records opener, Rise, is an eerie and melodic tinkering intro. As a whole, the release of Hinterland on Ghostly International is a perfect marriage the label has always had an affinity for music with depth and frequencies that can magnetize a wide variety of listeners. Basically, this is the album that had to come out of Recondite eventually, he adds, smiling. It is Recondite.