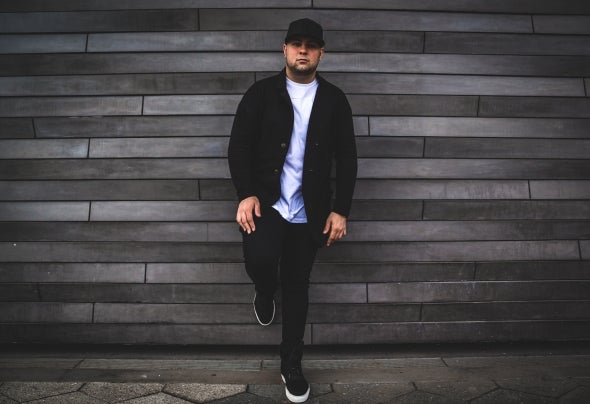 They say that natural musical ability and a strong ear for music is a gene passed down in one’s blood; a trait as hereditary as eye color, or facial features. Never has that been more true than the day Anthony Cardinale received his first drum set, at the early age of three. With only one basic, informal lesson from his Dad (a singer-songwriter, midi programmer, and keyboardist in a busy dance band), Anthony was already on his way to cultivating his masterful skills at beat-making; what they call, “a natural.”Anthony was born in Staten Island, NY on August 3rd, 1993, and, later, moved to Central New Jersey. At ages nine through twelve, he began to show his talents. All through grammar school, middle school, as well as high school, Anthony became the teachers’ “go-to” drummer for the most difficult selections in his Jazz Improvisation bands. He is what they call, a “pocket” drummer – someone that holds the meter and feel of the beat “in the pocket.”In the meantime,Anthony began to listen to many different styles of music, however, he was becoming more and more interested in the art of mixing. Not long after, at the age of twelve, Anthony started to DJ for an audience. While this helped him develop his skills at the turntables, he would soon discover what would inspire his passion; club music. Also inspired by bearing witness to his Dad’s use of computers to program the latest top-40 dance songs for gigging,Anthony later discovered more of his natural skills - this time, at the computer. He quickly learned the tools to express what was in his head and heart, and eventually, mastered his craft. But his most valuable tool, by far, is his meticulous ear, and critical listening skills. The stage was, indeed, about to be set.By the time he was fourteen, Anthony began attending teen clubs and venues, however, he felt little satisfaction in what the DJs were playing to that audience. His musical tastes were more progressive – more serious, and he sought out music from producers that were, rather, considered for a more mature audience. Alas, Anthony found his mission – to bring a true club experience to his audience. In 2009, at age fifteen,Anthony began booking at teen clubs.At about the same time,Anthony was commissioned for a teen night at Club Abyss, which caught the attention of XF Productions, a nightlife promotion company, who also understand Anthony’s passion and vision.Anthony then earned his first residency, at Club Abyss, in 2010.Despite his young age,Anthony has been working hard to spread his sound, and achieve his mission. Accomplishing more in just two short years than some artists with a ten- year career span, at age eighteen,Inarguably, performing live is the motivating factor behind any artist’s creative work. One of those works caught the attention of Fine Tuned Recordings, an independent label based in New York City. Premiering at #73 of the Top 100 Tech House artists on Beatport, Bring Silence, by Anthony Cardinale, climbed the charts to hold a position of #29 within two months (remix by Simone Vitullo, and, as an exchange, released on the Go Deeva Records label, in Italy). Since its release, Bring Silence has been charted by over fifty club artists, including Wally Lopez, Joe T. Vannelli, Luciano, DJ PP, David Herrero, Supernova, Fabian Argomedo, IvanPica, Hollen, Bias, Tony Dee, Severino, Emanuele Esposito, and more.Anthony has also been featured in articles for internet trade magazines such as House4DJ, and Music Beats. He also has been featured on Global Mix Radio for several internet interviews.To keep the promise of his mission on track,Anthony is currently working on music for many Record labels, which will include, as he says, “...the versatile sound I’m known for – groovy, melodic, chunky bass-lines, and all the ingredients the crowd loves to hear.”Getting an early start on a career is certainly beneficial, and considered a primary focus in any field.However, for a young producer looking to get his music heard in mainstream clubs, being under the legal age has its limitations. For now, though, Anthony doesn’t see this as a problem, but, rather, as an opportunity. Although he is eager, it is buying him more time to cultivate his own audience of his peers. When he’s ready, he’ll usher in a whole new crowd. Get ready for your transfusion.