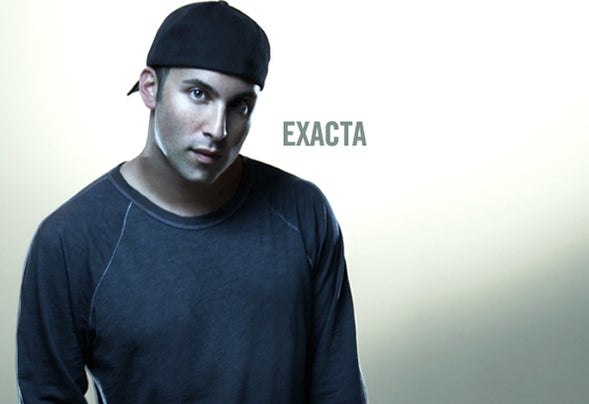 Exacta is one of New York's hottest rising talents making a name for himself as a heavy-hitter in the electronic music world. This rising star discovered his love for music as a young child listening to records in his basement in Queens, New York. His participation as a drummer in his junior high school's jazz band reinforced Exacta's appreciation for music, particularly soul, further fueling his desire to create his own original music. Exacta replaced his drums for turntables and evolved into a hip-hop DJ gracing the decks at nearly every NYC hotspot for celebrities such as Mariah Carey, Heidi Klum and P Diddy. After refining his turntable skills Exacta's musical style transitioned once again - this time from hip-hop to house. He quickly gained notoriety as one of the most upfront house DJs known for his sexy and unique style by being named Pacha resident DJ in 2005. He has been trusted to both headline and play alongside the likes of Erick Morillo, Todd Terry, David Guetta, Mark Knight, Funkagenda, Pete Tong, Tiesto, Paul Oakenfold, Hector Romero and Armand Van Helden. Exacta has risen to global prominence with a resume that includes the world’s top musically driven venues such as Pacha (NYC), Cielo (NYC), Pacha (Ibiza) Amnesia (Ibiza), Godskitchen (UK), Space (Miami), Prive (Hungary), Bon Bon (Shanghai) and Guvernment (Toronto). His musical prowess is constantly pushing the envelope making dance floors sweat by playing tracks that few would dare to play together. THE PRODUCER Exacta was fortunate enough to begin his production career working with world-renowned producer DJ Premier at D&D Recording Studios. However, it was not until he began working for London/FFRR Records (1993-1994) that Exacta began to learn the business of house music and envisioned a career himself as an artist. Ten years later Exacta was signed to world renowned Subliminal Records by the legendary Erick Morillo. His first three original productions, 'The Beat Inside You,' 'Flippin,' and 'Shake My Soul' would introduce him to the global house community. During the summer of 2006, Roger Sanchez broke Exacta's remake of the classic 'Pride (A Deeper Love)' on his BBC Radio 1 Essential Mix. Immediately, a club killer was born. His follow up releases, 'Set Me Free' and 'You Keep Calling Me' set dance floors on fire and hit charts around the world, thus cementing his place in the industry. Exacta was able to parlay this buzz, remixing for Nelly Furtado and Paris Hilton, showcasing his diverse background and production range. His 2007 releases 'Stuck On Your Love' and 'Lost In Music' received rave reviews leading to Exacta's guest mixes on Roger Sanchez’s international radio show “Release Yourself”, Justmusic.fm, XM Radio and his new weekly home on SoulGood in Australia. This year, Exacta has continued his worldwide presence by having two original productions on Radio 1’s Essential Mix (Exacta & Funkagenda “Mad Money”, Exacta & Valentino “Turn Me On”). With his release “Soul Survivor” (Nervous Records) and his global brand, Double Frequency, the name Exacta is one you will be hearing often.