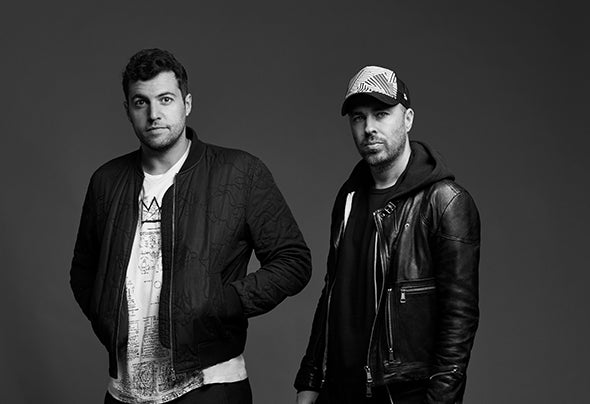 Waze & Odyssey a.k.a Serge Santiago and Firas Waez, released their first track ‘Ah Baby (Here We Go Again)’ in early 2012 and have been carving their way through the dance music scene ever since. The now accomplished duo has seen significant chart success alongside some monstrous tour dates along the way. Their overall sound is not confined to their productions; the pair are DJs as much as they are producers. While managing to break down the boundaries between festival life and club intimacy, the enigmatic duo has created a timeless movement seeing them play to crowds at Hideout Festival in Croatia alongside illustrious club appearances at Panorama Bar (Berlin), Bob Beaman (Munich), Showcase (Paris) and Verkript (Amsterdam). Their musical output has been constant throughout their career and has charted their success. With releases on numerous labels such as Edible Records, Circus Recordings, Get Physical, Wolf Music, Dirt Crew, VIVa MUSiC, Elrow, Throne of Blood and their imprint W&O Street Tracks they have nurtured a signature sound that culminates a mixture of old and new elements together. Their use of 808 drum machines, Linn Drums and DMX's alongside their assisted plugins results in a powerful and unique trademark to their records. This style also reflects their DJ sets, where classic and contemporary combine which keeps the crowd grooving, inspired by the pair’s affinity with crate digging which results in the finest of techno and house tracks. This ability to showcase the best of house and techno to the world showcases Serge and Firas’ admirable approach to their DJ sets. Their life on the road continues to introduce the duo to new crowds from all corners of the globe. Highlights include US performances at the Faraway Warehouse parties in Los Angeles and Monarch in San Francisco alongside major European hotspots at Arma (Moscow), fabric (London), Razzmatazz (Barcelona) and The Warehouse Project (Manchester). The duo's sound has even stretched as far as New Zealand, Australia, and Asia with a standout show at Zouk (Singapore) leaving crowds ecstatic by the duo's incredible taste and energy. Along with DJing and production, the duo founded their record label, W&O Street Tracks, in 2012. With an attentive ear for new and upcoming talent, the imprint has grown with them, providing a platform to assist other talented and passionate acts in achieving a similar goal. Acts they have championed on the label include Pedram, Mella Dee, Citizenn, Tapesh, Ejeca, John Tejada, Trikk, New Jack City, Bodhi, Daniel Steinberg, Mediman, Elphinio, XXXY, and Urulu. Serge and Firas have every right to be satisfied with the legacy they will leave on dance music, presenting some of the finest up and coming talent in modern dance music. As they continue to push the boundaries, the pair can take solitude in leaving the scene in a better state than when they found it. With a string of successful remixes for the likes of TEED, Disclosure, Compuphonic, Jodie Abacus, Citizenn and Ejeca, the industry's top names have made no qualms about handling remix duties to the talented pair. This unique combination allows them to gain insight into brand new and exciting music, leaving them very much still at the forefront of their art.