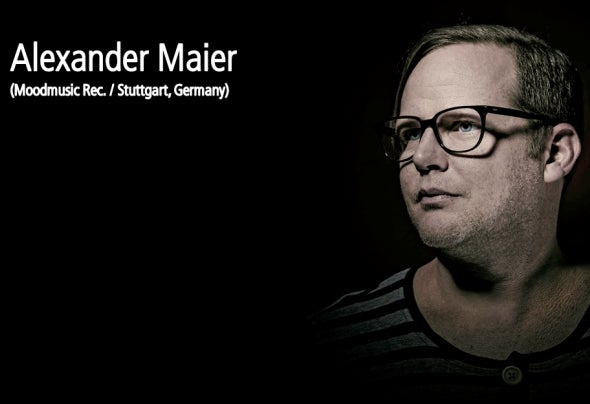 alexander maier was born '74 in stuttgart. As a teenager he worshipped „The Cure“ and „Depeche Mode“. Beside his deejay- and producer-career he works as a project manager for a internet agency, loves to cook regional and thai food or is yearing for summer to wear his flip flops - he is addicted to them and having them on from may to october.He loathes all the boulevard media hypes, but likes trash-tv. His fridge always contains a bootle of iced „grey goose“ and serano ham. Before climbing into bed, he always drinks a coke, smokes a fag, goes to toilet, sets the alarm clock on his iphone and feeds his crazy cats.Alexander is spinning records for over 20 years, playing from fresh house to dark detroit-techno, always deep and often spiced with some melancholia. Beside national & international bookings he always appreciates to play in his residency „Rocker 33“ in Stuttgart. He’s releasing on labels like Moodmusic, Dieb Audio, Blu Fin (together with Marius Lehnert as almaMale), Buzzin Fly, Brown Eyed Boyz Records, and more. Since late 2008 he is part of the Moodmusic Crew.Beside his lastest release “lost souls” on the french label “Brown Eyed Boyz Records” his remix for “Dispatch” of the egypt guys “Adham & Hisham Zahran” has been released on the same label and already got some great feedback from the deephouse-lovers-front. Coming up in a couple of weeks & being fu*** proud of it, is his interpretation for „Kris Menace feat. Miss Kittin – Hide” on Compuphonic. After that and beside some remix- issues Alex is working on his 1st Album containing some nice features - to be expected mid / late 2013. Alongside & not being lazy at all, the working machine & so called “The Love” is playing some deejay gigs all over germany and europe.Watch out, this old bastard never sleeps!