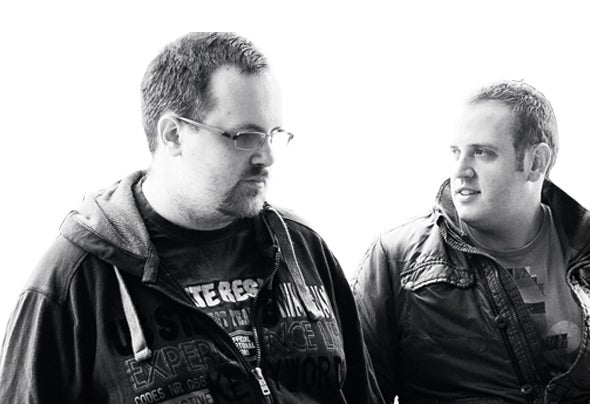 On new year’s eve 2006-2007, Christopher V contacted Jordan via a friend Bram that was producing with Jordan for Paradise Troopers. Chris wanted to know what I thought of his productions. Then, with time, they got to know each other’s style more and more, and Jordan started tweaking his productions to make them sound better, and Chris started helping Jordan with melodies.They eventually decided to meet and make music, and they produced many (unreleased) tracks. As Chris had released a couple of tunes on the same label that was interested in Paradise Troopers back in time, they knew they could just fix a few songs together and have them published.However, it quite strangely didn’t work that easily, because every single time they decided to do a “simple track” and produce it in an effective way (that is, with not too much attention for detail), they continued working and working on these tracks, and they eventually became so complex (and heavy for their production software) that Jordan got bored of them and threw them away before they put the last final notes in it.They were close to signing on a couple of labels, so they had to come up with a name. As Christopher’s surname starts with a V and Jordan's with a W (double- V in french), there were three V’s, and they thought to make something funny out of that. But actually, they didn’t. Instead, it’s a script that Jordan wrote for fun that came up with the random word combo. First Effect was born, alongside plenty of names for their next releases.Regarding their latest projects as First Effect, they released their first single featuring Olivia on the singing duty: “Humanity Highway” has been released on Silent Shore Records. It received support of many DJ’s, such as Adam Nickey, Roger Shah, Eco, Jon O’ Bir, John Askew, Fast Distance, ReOrder, Dave Deen, Haris C, Pedro Del Mar and had positive feedback from Above & Beyond, M.I.K.E., Ernesto vs Bastian, Running Man, Suncatcher...Since “HH” got released, they receive a lot of remix requests they’re currently working on, so stay in touch for more stunning releases of First Effect.