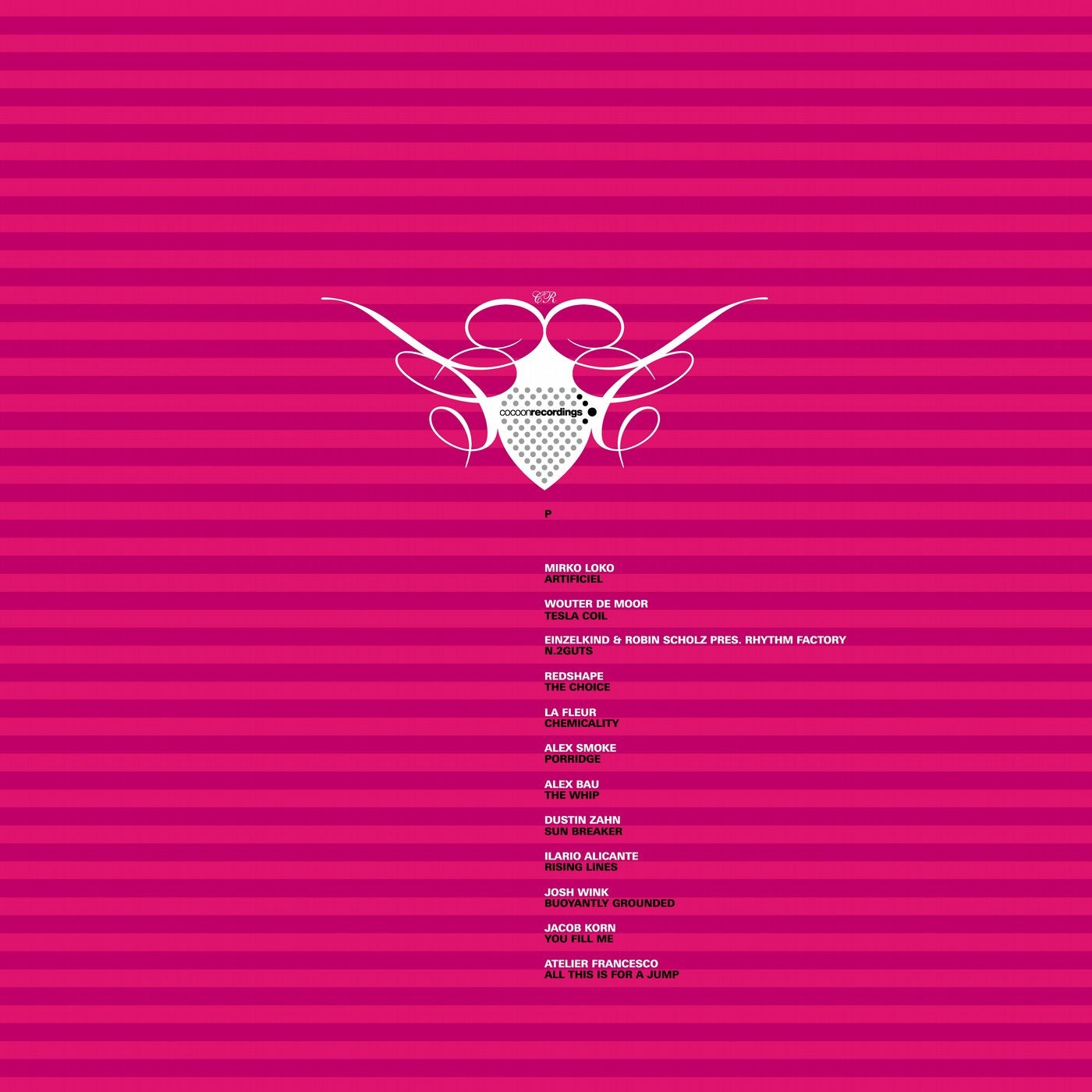 Cocoon Recordings presents: P! Who would have thought of this at the beginning of this compilation series? Its letter P everybody, which means this is one of the longest running techno compilation series around! Loaded with power and purity the latest edition of our series offers you a great selection of freaking crazy and kicking techno tunes. Our last compilations followed the basic concept of good club nights with an introduction part, the peak time and some cool downs and even after hour sounds. In contrast to this we open the clubdoor with P right from the start, no time for easy chit chat and soft entries - we want to move our feet and heads right from the beginning and here we are: Mirko Loko is in control for the beginning. His track "Artificiel" is energetic, crazy and minimalistic at the same time. With destroyed digital sound fragments, yet consistently demanding, Mirko Loko opens the door and welcomes you to the club of P! Wouter de Moor follows with his "Tesla Coil" - a speedy acid tune that has only one message: Freak out! With the pace, the simple structure and those crazy hihats Tesla Coil" sounds almost like an old steam locomotive. The sounds hiss and the beat rolls and the clubtrain wont stop! Einzelkind & Robin Scholz present their "Rhythm Factory" project next and their mutual work "n.2guts. Another kickin acid-tune, full of power with a energy loaded forward boost. Slightly slower than Wouter de Moor but certainly with a similar vibe the two tunes act as a perfect double-pack! Coming up next is Redshape, one of the hottest techno-acts of the past two years. He also follows the red acid-tip of the previous tracks. Redshape adds a bit of a Detroit- and Dopplereffekt vibe to his acid shot and looks clearly at the peak time with this! Swedish La Fleur is another act that made quite some waves in 2016. She contributes her track "Chemicality" to our selection which is nothing less than another great techno anthem! She adds epic synths but manages to create a powerful techno composition here that wont slow down at all. Porridge" by Alex Smoke comes in sixth place in our selection. Mister Smoke is doing the shuffle here and creates massive musical tension by using cool but insane sounds. This is high voltage and a sure shot for this years festival and open air season. "The Whip" by Alex Bau at position seven is big time chicago-techno with a strong DJ Sneak / Blu Funk feeling. Hypnotic, oppressive and with no frills. Alex Bau takes some risks with The Whip" and wont be everybodys darling with this piece but dropped at the right time in the right club this one will take you to dancefloor heaven and it will be one of the highlights of the night! Speaking of highlights of the night: Please welcome techno champion Dustin Zahn to our club! His "Sun Breaker" is powerful, strong and masculine. The initial hypnotic loop aesthetics progresses fairly quickly in a massive production full of powerful synths and freaked out sounds. This is great and techno at its best! Coming up next is "Rising Lines" by our Cocoon Recordings artist Ilario Alicante. The Berlinitalian delivers another of his strong deep techno monsters and follows the course set by Dustin Zahn: Big string sounds and twisted harmonies makes "Rising Lines" an epic techno cinema highlight! And we wont stop or slow down here yet, we even shift one gear up by throwing Josh Winks "Bouyantly Grounded" into the our selection. A fat fish for sure by one of longest companions with whom we share so many memories and great parties! Big techno festivals, Ibiza, Cocoon Club Frankfurt, the list of our common experiences is infinite. The Ovum mastermind has been one of our Cocoon Booking fix points for many years now and he presents an absolute highlight with his tune! Gloomy and yet full of positive energy "Bouyantly Grounded" pushes the speakers in a powerful manner and will turn each festival and each open air (again) into another unforgettable event. "You Fill Me" by Shooting Start Jacob Korn follows Josh Wink and adds a bucket of nice musical emotions. We slowly move to the end of our selection and Korn delivers the perfect tune to make the final transition. The shootingstar designs an amazing creation full of gentle harmonies and profound melodies - his contribution deserves to be labeled as "techno music". Any sunrise and any afterhour will be better with "You Fill Me" - this is electronic beach life brought to your speakers. Jacob Korn defines techno in a very own style with a very high quality - a true techno masterpiece! Our last track "All this for a Jump" by Atelier Francesco is in charge for the crowning conclusion: After such a big portion of perfect club sounds and pure techno there is hardly anything to add so we thank Atelier Francesco for this slightly different musical approach. Cool but kickin ' 80s retro sounds meet a very unique electronic funk feeling - the captivating vocals make the picture complete. "All this for a Jump" is not only our last track on this CD, this track would also make any big party looking good as a closing track.