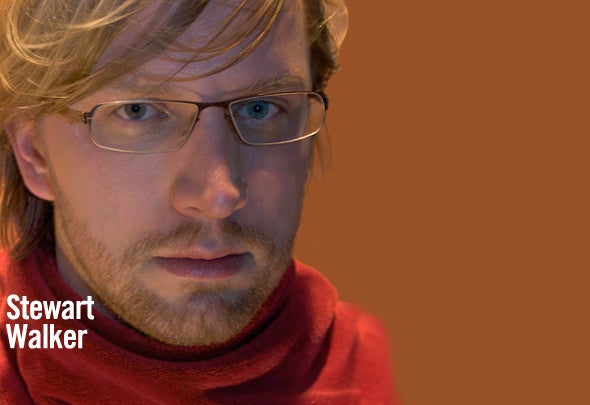 Berlin-based Stewart Walker is a restless innovator. After making a splash in the late nineties on definitive labels like Force Inc. and Tresor, he’s had an inestimable impact on the development of current club sounds, yet consistently chooses the less traveled road: working as live producer in a world of DJs; injecting emotion into functional electronic dance music; quietly building a label family of unclassifiable artists on his own imprint, Persona. After selling his guitar in 1993, Walker began assembling a synth- based hardware studio while in university in Athens, GA. Inspired by Jeff Mills’ Live at the Liquid Room he became obsessed with rhythm. A string of recordings appeared on Matrix Records in Detroit – including the 1997 single Amphetamine Sulphate – and later on Deepfried (Grand Rapids, MI) and Tektite (Austin, TX). A year later, his first European release Artificial Music for Artificial People was picked up by Cristian Vogel's British imprint, Mosquito, and Walker hit the live circuit. Armed with only an AKAI MPC2000 sampler and a DJ mixer, he did what a DJ never could: move a club crowd with sounds shaped by his own hands. This original approach was welcomed across Europe and in Japan as well as his native US. 1999 saw Walker’s debut on Berlin’s Tresor Records with Nothing Produces Stark Imagery, followed up by the now-classic minimalist experiment, Stabiles, on Mille Plateaux. These productions proved to be seminal in the development of minimal techno. Walker continued to release on labels such as Minus and Force Inc. until, in 2001, he set up his own imprint, Persona Records. Persona released eleven records in the US culminating in the second landmark album of Walker’s career to date: Live Extracts (2003). Live Extracts captured the sound and atmospherics of Walker’s in-club performances and was soon licensed by Tresor. Persona restarted in 2005, this time in Berlin. Now based in Europe, Walker performed in every capital and made incursions as far afield as Australia and Russia. Soon after, he released the downtempo album Grounded in Existence and a breakbeaty techno EP, Travel Plaza. These releases showcased Walker’s increasing attention to nuance, dynamics, and melody. Concentricity, Walker’s fourth full-length, was released in 2007.